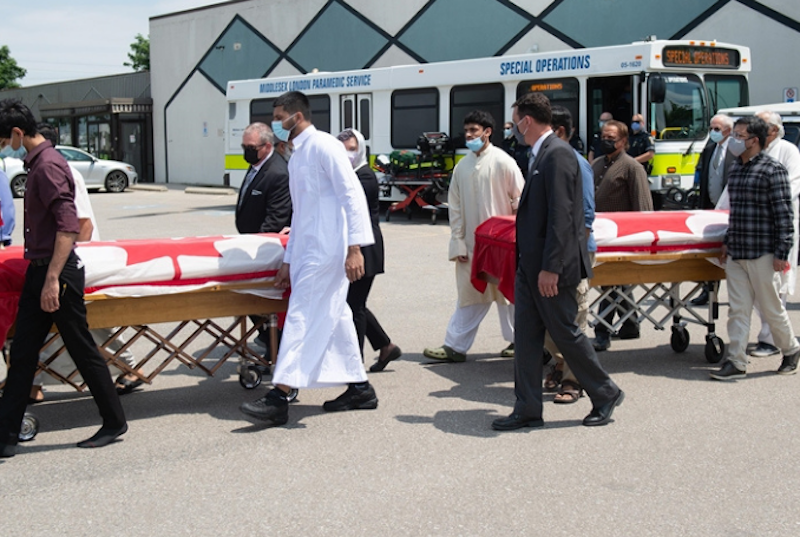 Mourners and supporters gather for the funeral of the Afzaal family members. (Photo: John Densky, via Anadolu Agency)

The killing of a Muslim family on June 6 in Ontario, Canada, again presented an opportunity for Canadian Prime Minister, Justin Trudeau, to brand himself as a voice of reason and communal harmony.

However, Trudeau’s amiable and reassuring language is designed to veil a sinister reality which has, for many years, hidden the true face of Canadian politics.

“This was a terrorist attack, motivated by hatred, in the heart of one of our communities,” Trudeau told Parliament, two days after a Canadian terrorist, Nathaniel Veltman, deliberately struck a Canadian Muslim family at an intersection in London, Ontario. Only a young boy survived the attack which killed his parents, sister and grandmother. The 9-year-old boy remains in critical condition.

The Prime Minister, whose brand of friendly and progressive liberal facade is often juxtaposed with the rise of conservative, populist politics in much of the Western hemisphere, went on speaking as if an activist advocating human rights and equality for all. “If anyone thinks racism and hatred don’t exist in this country, I want to say this: How do we explain such violence to a child in a hospital? How can we look families in the eye and say ‘Islamophobia isn’t real?’” Trudeau said.

Ironically, it took years of pressure and concerted lobbying from many civil society organizations, progressive and Muslim groups to finally convince Trudeau to designate Jan. 29 as the "National Day of Remembrance and Action on Islamophobia." This specific date was chosen to commemorate the terrorist attack by a Canadian citizen on a Quebec City mosque in 2017. Six Canadian Muslims were killed and 19 others were injured in the hate crime in the Grand Mosque.

That attack, too, was an opportunity for Trudeau to rail against terrorism and hate. Ultimately, it was all empty rhetoric, as the Canadian government has done little to rectify the dangerous phenomenon. This lack of meaningful action makes the government complicit in the rising Islamophobia and hate crimes in Canada.

By way of explaining his rejection of recognizing January 29 as the day of "action on Islamophobia," Trudeau told Radio-Canada that, while it is “important to underline intolerance directed at people of faith,” he wished to “avoid that type of backlash that we’ve seen when we take these kinds of actions,” since the perpetrators of hate crimes are “still a small intolerant minority.” Jingoism aside, Trudeau was essentially arguing that recognition and action against Islamophobia were unnecessary as they may give too much attention to a small and hateful "minority."

Trudeau is utterly wrong. A report submitted by the United Nations Special Rapporteur on Freedom of Religion or Belief in November last year showed that a majority of Canadians -- 52 percent -- believe that Muslims cannot be trusted, while 42 percent feel that discrimination against Muslims -- read: racism -- is mainly the fault of Muslims themselves.

The UN findings are part of a long trajectory of violence and racism targeting Canadian Muslims. A Gallup Poll published in 2011 has already debunked the "small minority" claim. Canadian Muslims -- 48 percent -- along with American Muslims -- 52 percent -- feel disrespected within their societies. This "disrespect" manifests itself in numerous ways, much of it unreported, occasionally making news when it translates into outright violence. Indeed, there is plenty of that too.

Official Canadian police reports demonstrate that hate crimes against Canada’s Muslims are on the rise, with 166 such incidents reported in 2018, 181 in 2019 and so on, with violent crimes becoming more intense and bloodier with time.

Sadly, anti-Muslim terrorism in Canada is likely to increase in the future, not only because hate crime statistics show an upward trajectory, but because anti-Muslim sentiments often take center stage in government and media as well.

Negative depictions of Islam and Muslims in Canadian media must not be grouped under the designation of ‘mainstream Western media bias’, as media fear-mongering is penetrating the very psyche of large sections of Canadian society. Many Canadian politicians, even in Trudeau’s own party, often exploit this alarming phenomenon to feed their political ambitions.

Various Canadian provinces have either passed or drafted laws that specifically target Canada’s Muslim minorities, for example, Quebec’s Bill 62, which restricts the wearing of the niqab in public buildings. Outrageously, the Bill, which was passed by Quebec’s Liberal government in October 2017, followed the bloody attack on the Grand Mosque in Quebec City. Instead of fighting Islamophobia, Quebec’s officials provided it with a legal and moral justification.

While feeding Islamophobia at home, Trudeau persistently rages against human rights violators in China, the Middle East and around the world. As Chinese columnist Mu Lu rightly argued in Global Times, Canada uses “human rights as a stick to beat others.” While the same claim can also be made regarding the misuse of human rights as a foreign policy tool by other Western leaders, Trudeau is often successful in presenting his human rights concerns as genuine.

If Trudeau is, indeed, genuine in his desire to root out anti-Muslim terrorism from Canada, he should start by cleansing his own party of hate speech, end all attempts at criminalizing Islam and Muslims and ban hate speech against Muslims in the media.

Terrorism will not end as a result of pomposity but through real action. Trudeau seems to have much of the former and none of the latter.