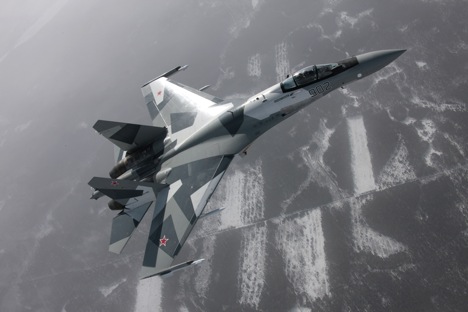 Oct. 12, 2014 (Russia & India Report) -- Outgunned by the Su-30 family of aircraft and suffering critical design flaws, the American F-35 is staring down the barrel of obsolescence – and punching a gaping hole in western air defences.

Built to be the deadliest hunter killer aircraft of all time, the F-35 has quite literally become the hunted. In every scenario that the F-35 has been wargamed against Su-30 Flankers, the Russian aircraft have emerged winners. America’s newest stealth aircraft – costing $191 million per unit – is riddled with such critical design flaws that it’s likely to get blown away in a shootout with the super-maneuverable Sukhois.

Stubby wings (that reduce lift and maneuverability), a bulbous fuselage (that makes it less aerodynamic) low speed and a super hot engine (which a half decent radar can identify) are just a few of the major flaws that will expose its vulnerability during air combat.

With more than 600 Flankers (Sukhoi-27s and its later iterations such as the Su-30, Su-34 and Su-35 Super Flanker) flying with air forces around the world, the fate of the fifth generation F-35 seems decidedly uncertain. Aerospace experts across the world are veering around to the view that America’s most expensive fighter development programme (pegged at $1.5 trillion) will be a sitting duck for the flankers.