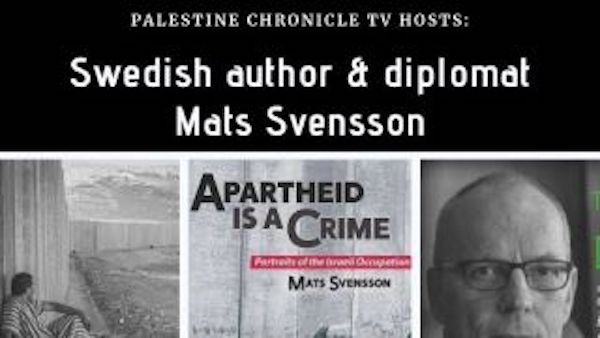 Former Swedish Diplomat Speaks about His Experiences in Occupied Palestine

Mats Svensson is a former Swedish diplomat, an author and a photographer. His books include “Crimes, Victims and Witnesses -- Apartheid in Palestine.” His latest volume,  “Apartheid is a Crime -- Portraits of Israeli Occupation,” was just released by Cunepress in Seattle.

Svensson joined me and my co-host Romana Rubeo on “Palestine Chronicle TV,” on May 6, to discuss his fascinating experiences in Palestine and the balancing act of being a diplomat and a conscientious human being who cares deeply about the principles of justice and equality.

“I went to Palestine in 2004; before that, I had been working for many years in Bangladesh, in Congo, (and) in South Africa. They convinced me to go to Palestine. I prepared myself. I read a lot,” he began.

“I spent the first ten days moving around, talking to journalists, to politicians, to UN people. I remember going to Qalqilya (in the northern occupied Palestinian West Bank), where I saw the Wall for the first time. I talked to people that had lost everything because they had the land on the wrong side of the Wall. Then I went to Hebron and I went to Gaza. And something happened inside of me during this time. I was in a shock. I understood that I was not prepared at all. Something had manipulated me but I did not know what it was, at the time.”

Svensson reflected on his experiences in South Africa which fought a long and arduous struggle against apartheid and racism. He told us, “When I was in South Africa, I had a feeling that there was something missing, because I went there after 1994, in 2000. It is as if what I was looking for in South Africa was happening in Palestine now.”

“The representative of South Africa in Ramallah laughed when I told her that and she said: ‘100% of South Africans who spend at least one month here, we all say that apartheid in South Africa was just a picnic compared to Palestine.’ I said: ‘I don’t believe it, you can’t mean that’. But she answered: ‘You don’t have to believe me, you might believe Desmond Tutu, who keeps repeating it every week; you might believe Mandela.’”

“That was my beginning.”

Indeed, that was just the beginning. The time that Svensson spent in Palestine was more than enough to convince him that what is taking place in Palestine is even worse than apartheid, and that “silent diplomacy” will never work as a tool of pressure on Israel to end its subjugation of Palestinians.

Watch our exciting interview with Mats Svensson and make sure that you obtain his latest book “Apartheid is a Crime” at this link.