The Politics of Cheering and Booing: On Palestine, Solidarity and the Tokyo Olympics | Ramzy Baroud 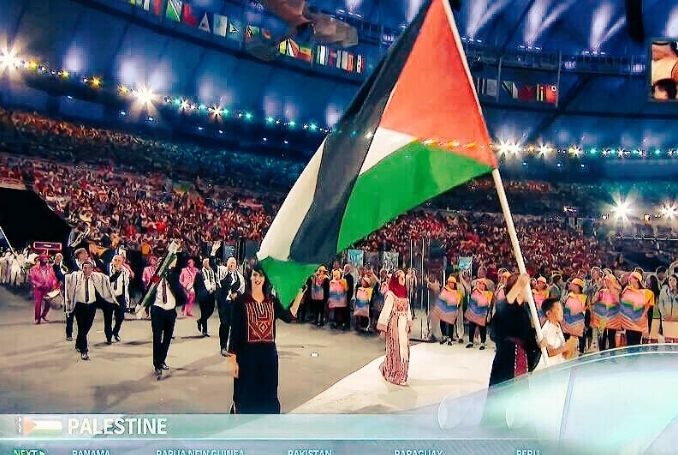 The flag of Palestine was carried into the 2016 Olympics by a Palestinian woman. (Photo: via Twitter)

When the Palestinian Olympic delegation of five athletes -- adorned in traditional Palestinian attire and carrying the Palestinian flag -- crossed into Tokyo’s Olympic Stadium during the inauguration ceremony on July 23, I was overcome with pride and nostalgia.

I grew up watching the Olympics. All of us did. Throughout the month-long international sports event, the Olympics were the main topic of discussion among the refugees in my refugee camp in Gaza, where I was born.

Unlike other sports competitions such as football, you did not need to care about the sport itself to appreciate the underlying meaning of the Olympics. The entire exercise seemed to be political.

However, the politics of the Olympics is unlike daily politics. Indeed, it is about something profoundly deeper, related to identity, culture, national struggles for liberation, equality, race, and, yes, freedom.

Before Palestine’s first Olympic participation in 1996, with only one athlete, Majed Abu Marahi, we cheered -- we still do -- for all the countries that seemed to convey our collective experiences or share part of our history.

In our Gaza refugee camp, in a small, often hot, simply furnished living room, my family, friends, and neighbors would gather around a small black and white television set. For us, the opening ceremony was always critical. Though the camera often allocates mere seconds to each delegation, a few seconds were all we needed to declare our political stances regarding each and every country. It was no surprise, then, that we cheered for all African and Arab countries, jumped in joy when the Cubans came marching in and booed those who have contributed to Israel’s military occupation of our homeland.

Imagine the chaos in our living room as a small crowd of people made loud and swift political declarations about every country, making a case of why we should cheer or boo, all simultaneously: “The Cubans love Palestine,” “South Africa is the country of Mandela,” “The French gave Israel Mirage fighter jets,” “The Americans are biased towards Israel,” “The president of this or that country said the Palestinians deserve freedom,” “Kenya was occupied by the British too,” and so on.

The judgment was not always easy as, sometimes, none of us would be able to offer a conclusive statement to make a case for why we should cheer or boo. For example, an African country which normalized relations with Israel would give us pause: we hated the government but we loved the people. Many such moral dilemmas were often left unanswered.

These dilemmas existed even before I was born. The previous generation of Palestinians also struggled with such pressing quandaries. For example, when African American athletes, Tommie Smith, and John Carlos, raised their fists during the award ceremony in the October 1968 Olympics in Mexico City, that, too, must have been a difficult philosophical question to be readily answered by the residents of my refugee camp. On the one hand, we loathed the historically devastating role played -- and continues to be played -- by the United States, in arming, funding and politically supporting Israel. Without such support, Israel would have found it impossible to maintain and profit from its ongoing system of military occupation and apartheid. On the other hand, we supported, as we continue to support, African Americans in their rightful struggle for equality and justice. In these situations, it is often resolved that we should support the players while still rejecting the countries they represent.

The ongoing Tokyo Olympics were hardly the exception of this complex political system. While much media coverage has been placed on the COVID-19 pandemic -- the fact that the games were held in the first place, the safety of the players, and so on -- the politics, the human triumph, the racism, and much more were also still present.

As Palestinians, this time around, we have more to cheer for than usual: our own athletes. Dania, Hanna, Wesam, Mohammad, and Yazan are making us proud. The story of each one of these athletes represents a chapter in the Palestinian saga, one that is rife with collective pain, besiegement, and ongoing Diaspora, but also hope, unparalleled strength and determination.

These Palestinian athletes, like athletes from other countries that are enduring their own struggles, whether for freedom, democracy, or peace, carry a heavier burden than those who were trained under normal circumstances, in stable countries that provide their athletes with seemingly endless resources to reach their full potential.

Mohammad Hamada, a weightlifter from the besieged Gaza Strip, competes in the 96kg men snatch. In actuality, the 19-year-old is already carrying a mountain. Having survived several deadly Israeli wars, a relentless siege, lack of freedom to travel, to train under proper circumstances, and, of course, the resulting trauma, by taking his first step in the Tokyo’s Olympic Stadium, Hamada was already a champion. Hundreds of aspiring weightlifters in Gaza and throughout Palestine must have watched him in their own living rooms, filled with hope that they, too, can overcome all the hardship and that they, too, could be present at future Olympics.

Yazan Al-Bawwab, the 21-year-old Palestinian swimmer, embodies, despite his youth, the story of the Palestinian diaspora. A Palestinian, who grew up in the United Arab Emirates, now living in Canada while carrying dual Italian and Palestinian citizenship, he represents a generation of Palestinian youngsters who live outside the homeland and whose life is a reflection of the constant search for a home. There are millions of Palestinian refugees who were forced by war, or circumstances, to constantly relocate. They too, aspire to live a normal and stable life, to carry the passports of their own homeland with pride and, like Al-Bawwab, to achieve great things in life.

The truth is, for us, Palestinians, the Olympics are not an ethnocentric exercise. Our relationship to it is not simply inspired by race, nationality or even religion, but by humanity itself. The dialectics through which we cheer or boo conveys so much about how we see ourselves as a people, our position in the world, the solidarity that we wish to bestow and the love and solidarity that we receive. So, Ireland, Scotland, Cuba, Venezuela, Turkey, South Africa, Sweden, and many more, including all Arab countries without exception, can be certain that we will always remain their loyal fans.