The Girl Who Fell to Earth — Mickey Z. 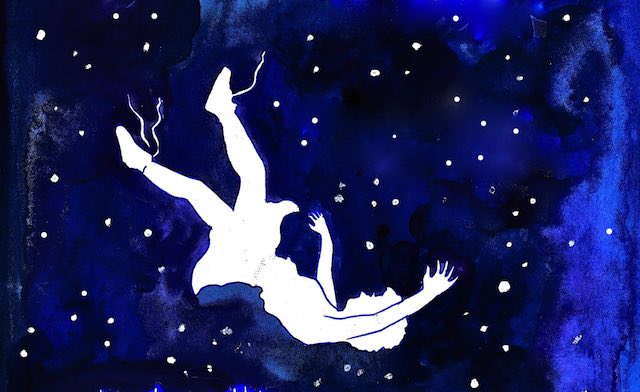 Imagine this: An attractive, white, blonde, smart, tough, and articulate male teenager survives a plane crash that kills all of the other 91 passengers (including his mother) — literally falling two miles from the sky and then surviving by his wits for 11 days without food or shelter in the Amazon rainforest forest.

How famous would this dude be? Even if all that happened in 1971, he surely would still be the standard for human survival. Do something smart and they’ll call you Einstein. Flex a muscle and you’re Arnold. Survive something tough and well… they’d compare you to the guy I described above. But… what if it were an attractive, white, blonde, smart, tough, and articulate female teenager? 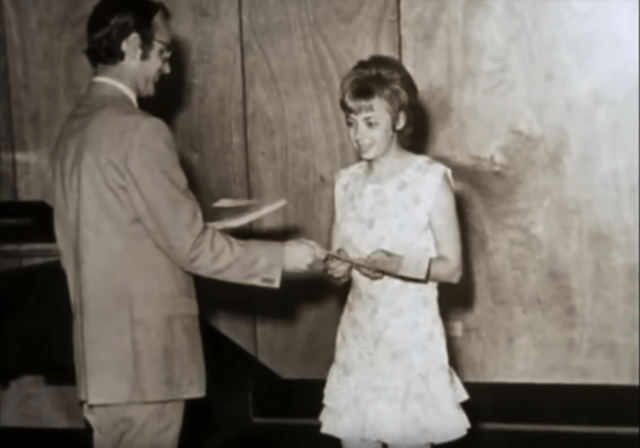 Born in Lima, Peru in 1954, Juliane Koepcke is currently a German mammalogist. On December 24, 1971, however, Koepcke was a 17-year-old high school student boarding LANSA Flight 508, along with her mother, 84 other passengers, and a crew of six.

“It was Christmas Eve 1971 and everyone was eager to get home,” Koepcke recalls. “We were angry because the plane was seven hours late. Suddenly, we entered into a very heavy, dark cloud. My mother was anxious but I was okay. I liked flying. Ten minutes later, it was obvious that something was very wrong.”

Here’s a brief recap of what was so wrong: After being inexplicably flown directly into a massive thunderstorm, the plane was struck by lightning and broke up at roughly 10,000 feet. Koepcke remained strapped into her seat through it all but her mother and the male passenger next to her were not. The teenager and her row of three seats were ejected from the nose-diving airliner and still restrained, she began her drop to the jungle.

“Suddenly the noise stopped and I was outside the plane,” Koepcke later wrote. “I was in a free fall, strapped to my seat bench and hanging head-over-heels. The whispering of the wind was the only noise I could hear. I felt completely alone. I could see the canopy of the jungle spinning towards me. Then I lost consciousness and remember nothing of the impact.” 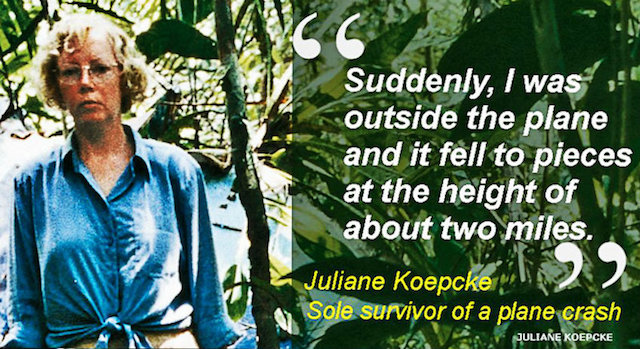 She survived. The row of seats caught a couple of updrafts which slowed her descent. Koepcke landed — seat first — on a canopy of trees so thick she likened them to broccoli when seen from above. All of this added up to facilitate her initial survival. Her calm focus and determination allowed her to go from there.

Against all odds, Juliane Koepcke fell two miles and ended up with a concussion, her right eye swollen shut, major gashes on her arm and calf, and a broken collarbone. With virtually no food, her glasses smashed, wearing only one sandal and just a short dress, she called on her strength, experience, and knowledge to survive and travel 11 days before finding help.

“I had a wound on my upper right arm,” she explained. “It was infested with maggots about one centimeter long. I remembered our dog had the same infection and my father had put kerosene in it, so I sucked the gasoline out and put it into the wound. The pain was intense as the maggots tried to get further into the wound. I pulled out about 30 maggots and was very proud of myself.”

Koepcke knew how to do stuff like this because both of her parents were zoologists who lived in the rainforest. “I had spent a year and a half with my parents on their research station [only 30 miles from the crash site],” said Juliane. “I learned a lot about life in the rainforest, that it wasn't too dangerous. It's not the green hell that the world always thinks.”

Not “green hell,” sure, but certainly far more than most humans could ever dream of handling. For more details of her ordeal, here is a 2000 made-for-TV documentary directed by Werner Herzog (who, by coincidence, was very close to boarding the same doomed flight in 1971):

Despite all the astonishing, headline-ready, and legend-making details above (and in the movie), this is probably the first time you’ve ever heard of Juliane Koepcke. She is no media creation. Her utter destruction of the specious frailty myth is not fake news. But, as a female, she is now mostly ignored. Rather than giving inspirational speeches and encouraging young girls to embark on exciting careers and overcome onerous obstacles, she’s a forgotten footnote. Indeed, she did not seek fame after the crash but more importantly, the pop culture fame machine did not seek her.

Let’s return to the opening premise. What if it were Julian Koepcke? A male high school student somehow manages to pull off what Juliane did in 1971, and he’s a permanent legend. Wheaties box cover at the time, major book deal, making the rounds on the TV talk shows, American Graffiti Harrison Ford plays him in the blockbuster film version, and his Oscar night date is Cher.

Julian Koepcke would pose with Bowie on the set of The Man Who Fell to Earth and remain an omnipresent icon for decades. Eventually, he might cash in with a “rainforest” workout video, do a guest spot on Survivor, and eventually get his own show on Netflix. No matter what: Today, at age 67, everyone would still know and revere his heroic name. Juliane Koepcke, the real-life girl who fell to earth? I’m guessing this is the first time you’ve ever heard of her.

It doesn’t have to be this way. The first step toward a more equitable, curious culture is allowing yourself to recognize what’s holding us back. Name the problem.