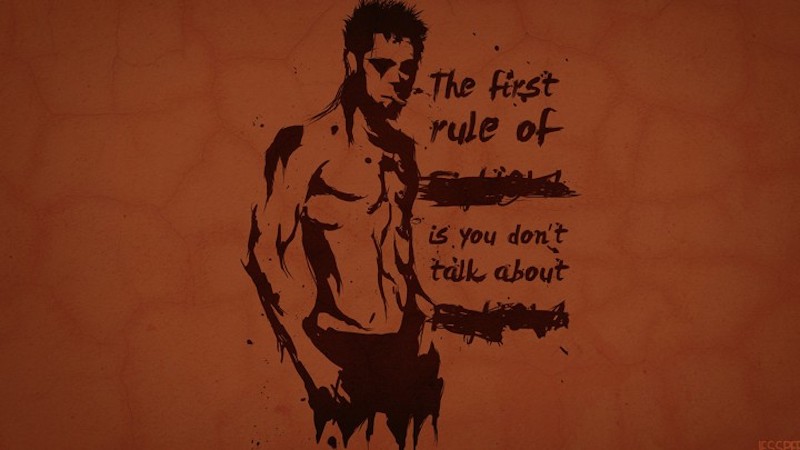 I saw Fight Club in the theater when it came out in 1999. It was love at first sight. Like the well-programmed white male “radical” I was, I swooned at the anarchy [sic] and anti-corporate virtue signaling, and dutifully memorized Tyler Durden’s pithy one-liners. Over the ensuing years, I read the book a few times and re-watched the film version more than a few times -- endlessly viewing select clips on YouTube.

Eventually, as I became “woke” to the once-invisible-to-me influences of patriarchy, I saw Fight Club quite differently. It suddenly appeared as a horrifying homage to male pattern violence, misogyny, and white supremacy. Middle-class white males were the real victims and the path to redemption was, of course, soaked in blood. I donated my copy of the book to the local library and stopped quoting Tyler Durden (at least, in public) lest I be accused of not being the “right” kind of feminist ally. The long relationship was over and I was at a loss -- embarrassingly unsure what I ever saw in him in the first place.

More recently -- identifying now as something along the lines of “ex-everything” -- I re-visited my old crush. What I saw with my latest set of new eyes was astonishing. Fight Club is now a cautionary tale.

Please allow me to introduce my final [sic] take on an ultimately meaningless piece of pop culture more than two decades old.

The Narrator (a.k.a. Edward Norton-Tyler) is an unhappy, unfulfilled, order-following corporate drone who seeks emotional emancipation by waging war against his cubicle and tie. In the process, he transforms into an unhappy, unfulfilled, order-following anti-corporate drone who misses the entire point of liberation. He’s a robot who switches uniforms without addressing his robot-ness.

Brad Pitt-Tyler’s quotes aren’t revolutionary or inspiring. Most of them are as mundane, predictable, and banal as the corporate-speak Narrator-Tyler encounters during an insurance inspection. They are shareable, fun, and occasionally thought-provoking meme material long before that sort of thing became ubiquitous. The book’s author and film’s director aren’t (I hope) attempting to position the two versions of Tyler Durden as opposites. We aren’t being asked to choose sides in some kind of epic showdown. Instead, we are being implored to recognize and subsequently abandon groupthink.

The road to self-realization and deeper connections with others does not include trading one soul-crushing hive mind for another. It doesn’t mean we merely aim our strident arrogance in a new direction and label it evolution. And it surely doesn’t require us to punch anyone into submission as a way to reconnect with our inner child and/or display our psychological independence.

Fight Club is a parable. It warns us about the seductiveness of conformity, the urge to surrender and delegate the hard work of emotional labor. Sure, the 9-to-5 grind is utterly inhuman and requires us to compromise on far too many levels. But the same can and must be said about all “activist” echo chambers -- from the “alt-right” to Occupy and beyond.

Despite all this and despite Fight Club being “an ultimately meaningless piece of pop culture more than two decades old,” there is still value in tuning (a little) into our inner Durden. Brad Pitt-Tyler can teach us to clearly define what’s important to us, fashion a mission to guide our actions, have some laughs along the way, and to not give too many fucks about contorting oneself into any societal box -- especially if that box reads: IKEA. Call it, “the ability to let that which does not matter truly slide.”

Narrator-Tyler tries to reign in the ugly and unnecessary aggression, delusion, and arrogance. To do so, he goes as far as shooting himself in the face just to stop Brad Pitt-Tyler’s misguided machinations. Narrator-Tyler teaches us that we can be truly decent people -- even as we strive to vigorously reject the mainstream formula and embrace the subversive pleasure of critical thought. At the end, it’s Narrator-Tyler who reaches for Marla’s hand and offers an apology (of sorts) as the violent virtue signaling plays out all around them.

We all have multiple personalities, contradictory ideals, and competing desires within us. They do not have to be labeled good or bad. What matters is how we manage such juxtapositions as they translate into daily behavior.

In other words, the first rule of Fight Club just may be… balance.

The first rule of Fight Club is to not join Fight Club by Mickey Z. is licensed under a Creative Commons Attribution-ShareAlike 4.0 International License.
Based on a work at https://worldnewstrust.com/the-first-rule-of-fight-club-is-to-not-join-fight-club-mickey-z.