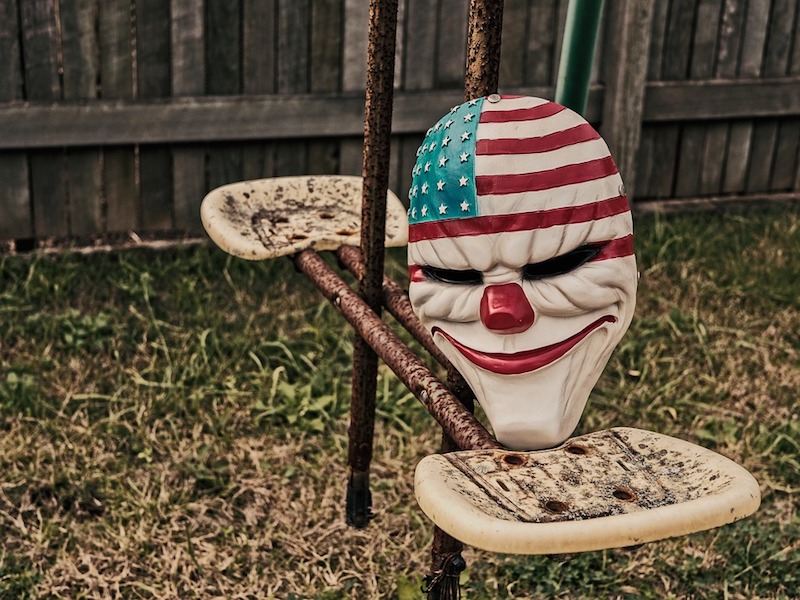 For anyone dwelling outside the “radical” hive mind, the Clown Show Left™ was yet again exposed in 2016. The full gamut of misogyny was unleashed last year by the ossified Counterpunch crowd, the Bernie Bro’s, the “manarchists,” and basically, everywhere else across the pathetic Occu-Sphere.

In late 2017, the post-Weinstein “reckoning” and the #metoo hashtag gave the brave men of the Left another chance to redeem themselves. Predictably, they doubled down on their male supremacy and ego-driven delusion.

To follow is but a mere sampling of what passes for revolutionary [sic] analysis [sic] on the Clown Show Left™ -- the same cesspool that brought you the “Assange was framed” scenario. Let’s start with a classic Left canard: anti-capitalism.

Clown Show Left™: The root problem is capitalism. All this #metoo focus on what’s “inappropriate” or not is just a distraction from the real work.

As if these clowns have ever done anything to actually address capitalism. FYI: Posting memes and correcting those who called #FeelTheBern a socialist doesn’t qualify as “work” -- real or otherwise. And, for the record, patriarchy is a much deeper and longer term root of oppression (as is white supremacy). P.S. If activism actually existed, it’d be quite possible to challenge both patriarchy and capitalism at the same time. They’re very much connected, btw.

Clown Show Left™: These liberals are such hypocrites. Where was their outrage when women were droned by Obama?

As if these clowns have ever done anything to address militarism. FYI: Posting memes and carrying signs about both parties being “war parties” doesn’t qualify as “work” -- real or otherwise. P.S. If activism actually existed, it’d be quite possible to challenge both patriarchy and militarism at the same time. They’re very much connected, btw.

Clown Show Left™: This reckoning only benefits bourgeois white feminists who can and do use their privilege to hurt men of color. Either way, it distracts us from the bigger issue of racism.

As if these clowns have ever done anything to address racism. FYI: Posting memes and wearing “I Can’t Breathe” shirts doesn’t qualify as “work” -- real or otherwise. P.S. If activism actually existed, it’d be possible to challenge both patriarchy and racism at the same time. They’re very much connected, btw. And if you wanna know if women of color support and benefit from the reckoning, try asking them instead of speaking for them.

Translation: Holy shit, I better mansplain my ass off before I’m the next one outed as a predator!

These same clowns virtue signal like crazy if someone uses words like “lynching” or “slavery” in the “wrong” way or if anyone dares point out that cops shoot white people, too.

Suggestion #1: Spend 10 minutes on Google and learn what a “witch hunt” truly was/is.

Suggestion #2: Paste this up on your wall and read it 20 times a day: 99.8 percent of those in prison for rape in the United States are men and 0 percent of these rapists committed their atrocity because the victim was “asking for it.” FYI: When males rape males it doesn’t challenge the need for a reckoning. It reinforces it, dumb ass.

Clown Show Left™: Al Franken was set up! Bernie is next because, um… political revolution.

Clown Show Left™: The “deep” issue is ecocide. If we don’t dismantle civilization, none of this matters. The real work is all about industrial civilization which makes me sad and oppresses me.

As if these clowns have ever done anything to address ecocide or “civilization.” FYI: Posting memes and making poorly produced videos doesn’t qualify as “work” -- real or otherwise. P.S. If activism actually existed, it’d be quite possible to challenge both patriarchy and ecocide at the same time. They’re very much connected, btw.

While you debate on Facebook
Theoretically, of course, ecocide… in a way, trumps everything. Thanks for explaining the obvious: we need a functioning eco-system. But try telling that to a little girl who’s being trafficked as you read this. Enlighten her with your #woke perspective. And her plight is FAR from all that’s happening while you yet again remain inactive, ineffectual, counterproductive, and complicit.

Disclaimer and trigger warning: What’s written below is an infinitesimal sampling of the minute-by-minute abuse perpetrated by males from every corner of the globe. And it helps if you click on at least some of the hyperlinks. In fact, I dare you to click on the links and read.

Here are just few not-so-subtle reminders of what males across the planet (including many on the Clown Show Left™) are planning and carrying out -- right now -- while you debate on Facebook about the real meaning of “inappropriate.”

Translation: Males as a class are exploiting and oppressing and abusing females as a class every second of every day, everywhere. But you’d rather engage in two-day flame wars on social media than name the problem. Especially when that problem is you and your ilk.

To the snide and despicable Clown Show Left™, I say: Go ahead, you tell the hundreds of millions of female victims what you think “witch hunt” means and how your voice is needed in women’s spaces and why capitalism this or civilization that is what really matters. Sit down with those hundreds of millions of female victims and educate them about drones and political parties and (wait for it) human rights! Edify them with your explanation of what sexual liberation looks like. And be sure to quote liberally from the endless array of male geniuses [sic] you worship.

It’s too late. But not too late.
As the typical Clown Show Left™ male hypocrite loves to remind us: We’re fucked. Extinction rates, topsoil depletion, ocean acidification, and deforestation -- we blew it. It’s too late in a vague, amorphous kind of way. But, in a clear and concrete way, it’s never too late.

Instead of virtue signaling 24/7 to his specious sycophants, the typical Clown Show Left™ male hypocrite must first and foremost, stop being an asshole. Stop being a predatory creep and stop enabling other predatory creeps. Part of that process involves becoming useful. If you’re willing to finally do the “real work” you claim to adore, there’s plenty of it to be done. This means putting aside your egos and your theories and your need for the spotlight. Surrender the microphone and surrender your attachment to being a “leader.” Basically: shut the fuck up and help someone.

I speak from personal experience when I say that all your books and radio interviews and heavily shared articles and public talks from coast to coast did nothing. Less than nothing. We wasted valuable time, helped no one, and became part of the problem.

If it’s too late to find and implement some grand unified theory of social justice, it’s more important than ever to embrace the mindset and work ethic of a cat lady. It’s never too late for men to become like worker bees. To find a mission. To be an active example. To find joy in the work. To shut the fuck up (except when exposing the Clown Show Left™, that is).

The clown show “Left” reacts to #metoo by Mickey Z. is licensed under a Creative Commons Attribution-ShareAlike 4.0 International License.
Based on a work at http://worldnewstrust.com/the-clown-show-left-reacts-to-metoo-mickey-z.