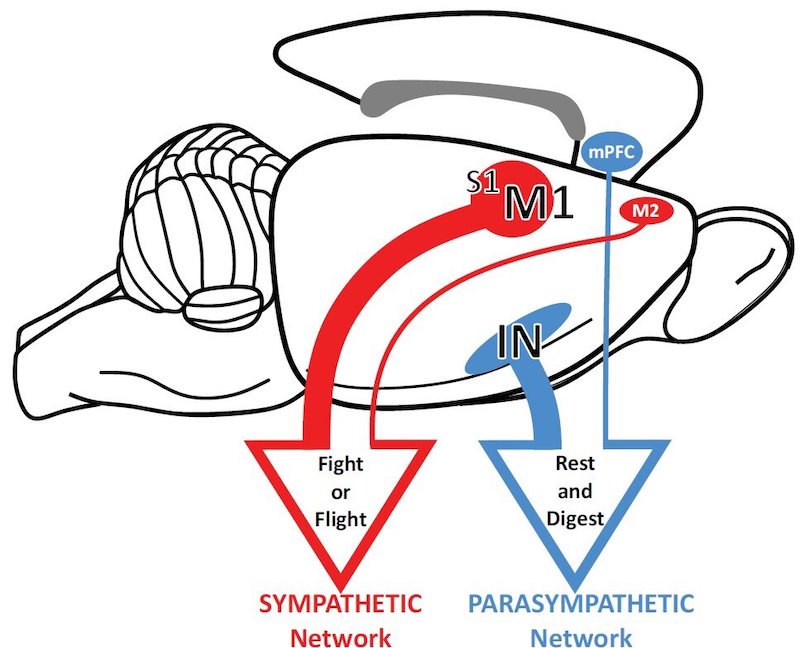 Two opposing circuits connecting the brain to the stomach convey either "fight or flight" or "rest and digest" commands to the gut. Credit: David Levinthal, M.D., Ph.D., and Peter Strick, Ph.D.

May 18, 2020 (MedicalXpress) -- Neuroscientists at the University of Pittsburgh Brain Institute have traced neural pathways that connect the brain to the stomach, providing a biological mechanism to explain how stress can foster ulcer development.

The findings, published this week in the Proceedings of the National Academy of Sciences, build a scientific basis for the brain's influence over organ function and emphasize the importance of the brain-body connection.

Until now, research exploring the gut-brain interaction has largely focused on the influence of the gut and its microbiome on the brain. But it's not a one-way street -- the brain also influences stomach function.

"Pavlov demonstrated many years ago that the central nervous system uses environmental signals and past experience to generate anticipatory responses that promote efficient digestion," said Peter Strick, Ph.D., Brain Institute scientific director and chair of neurobiology at Pitt. "And we have long known that every increase in unemployment and its associated stress is accompanied by an increase in death rates from stomach ulcers."