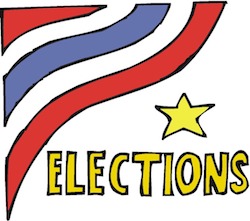 State election officials from across the United States gathered this weekend in Indianapolis amid an uproar over a White House commission investigating allegations of voter fraud and heightened concern about Russian attempts to interfere with last fall's election.July 9, 2017 (AP) -- State election officials voiced doubt Saturday that adequate security measures can be adopted before 2018 elections to safeguard against the possibility of a foreign government interfering in U.S. elections.

That's according to attendees at a weekend gathering of the National Association of Secretaries of State, whose conference was held amid an uproar over a White House commission investigating President Donald Trump's allegations of voter fraud and heightened concern about Russian attempts to interfere in U.S. elections.

The Department of Homeland Security said last fall that hackers believed to be Russian agents targeted voter registration systems in more than 20 states. And a leaked National Security Agency document from May said Russian military intelligence had attempted to hack into voter registration software used in eight states.

But both Republican and Democratic Secretaries of State, who are responsible for carrying out elections in many states, said they have been frustrated in recent months by a lack of information from federal intelligence officials on allegations of Russian meddling with the vote. They say that despite the best efforts by federal officials, it may be too late in to make substantive changes.