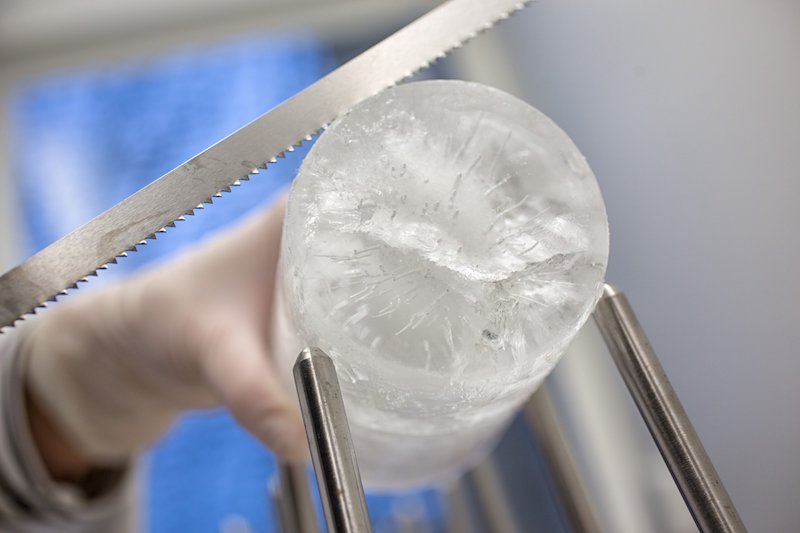 An AWI scientist is preparing an Arctic sea-ice core for a microplastic analysis in a lab at the AWI Helgoland. Credit: Alfred-Wegener-Institut/Tristan Vankann

April 24, 2018 (Phys.org) -- Experts at the Alfred Wegener Institute, Helmholtz Centre for Polar and Marine Research (AWI) have recently found higher amounts of microplastic in Arctic sea ice than ever before. However, the majority of particles were microscopically small.

Ice samples from five regions throughout the Arctic Ocean contained up to 12,000 microplastic particles per liter of sea ice. Further, the types of plastic showed a unique footprint in the ice, allowing the researchers to trace them back to possible sources. This involves the massive garbage patch in the Pacific Ocean; the high percentage of paint and nylon particles pointed to intensified shipping and fishing activities in some parts of the Arctic Ocean. The new study has just been released in the journal Nature Communications.

"During our work, we realized that more than half of the microplastic particles trapped in the ice were less than a 20th of a millimeter wide, which means they could easily be ingested by Arctic microorganisms like ciliates, but also by copepods," says AWI biologist and first author Dr. Ilka Peeken. The observation is a very troubling one because, as she explains, "No one can say for certain how harmful these tiny plastic particles are for marine life, or ultimately also for human beings."

The AWI researcher team had gathered the ice samples in the course of three expeditions to the Arctic Ocean on board the research icebreaker Polarstern in the spring of 2014 and summer of 2015. They hail from five regions along the Transpolar Drift and the Fram Strait, which transports sea ice from the Central Arctic to the North Atlantic.