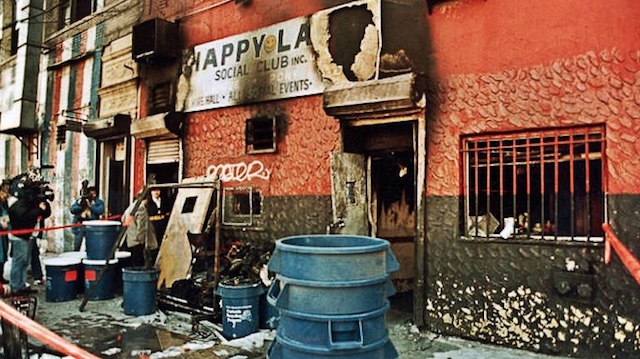 “Let everything happen to you/Beauty and terror

I’ve told you several times about my first gym job at the legendary and decadent Vertical Club in NYC. It was the most high-end health club in the U.S. and yours truly worked his way up to gym floor manager there. This position involved supervising and doing payroll for the “housekeeping” staff. The group of young male Latina porters on that staff became close with me as I helped them with their homework, taught them crucial (and comical) phrases in English, and made sure their paychecks were always “correct.” (In the pre-computer days of yore — it wasn’t too hard to give out, um… bonuses if any of my trainer or porter crew was in dire straits.)

Over time, the housekeeping staff evolved into something of a family affair. One porter — I’ll call him Neil — got hired first. He was part of a large Honduran community in The Bronx. Little by little, as job slots opened, Neil would suggest family members (or friends) from his neighborhood. This resulted in a tight-knit group that took their work seriously and looked out for each other. As their manager and friend, I made certain to always have their backs whenever one of the well-heeled gym members would give any of them a hard time (not an unusual occurrence).

As for Neil, he was quite a buoyant character and also, very muscular. When he’d workout on his breaks, everyone took notice. His English was not strong but he knew his way around a gym and was eager to become a trainer. Myself and the other trainers taught and coached him and one day, when a trainer slot opened, I vouched for Neil and convinced upper management to take a chance on him. I can still see his beaming face the first time he put on the Vertical Club (VC) trainer uniform.

All was going well at the gym for Neil and his family until one night, I got a call at home from a co-worker named Rafael. He had been a VC lifeguard but, with my help, also transitioned to the gym floor. Rafael was Latino and from The Bronx so he also became tight with the porters and often helped me with translating. Anyway, when I picked up the phone that evening, I heard Rafael’s somber voice: “Mick, I think we’ve got a big problem.” 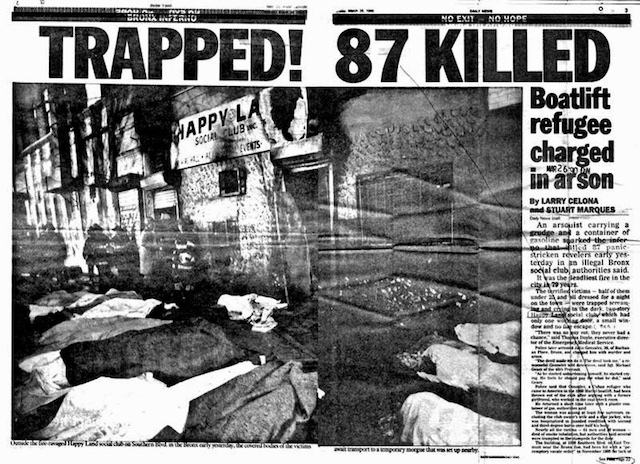 “They were found with drinks in their hands”

The problem Rafael was calling me about was big indeed. The night before, there had been a massive fire at an illegal Bronx social club called Happy Land. “Eighty-seven people were asphyxiated or burned to death within minutes,” wrote Ralph Blumenthal in the New York Times. “It was the worst loss of life in a fire in New York City since the Triangle Shirtwaist Company fire of 1911, exactly 79 years ago to the day.” (emphasis added) Four of those 87 lost souls were porters on the Vertical Club housekeeping staff — young men, one still in high school.

The Happy Land Social Club had no state liquor license and had been ordered closed for fire hazards and building-code infractions 16 months prior to the blaze. Thanks to slow-moving bureaucracy, it continued to operate with only one exit. The fire was set at around 3:30 A.M., the alarm was turned in at 3:41 A.M., and fire equipment reached the scene within three minutes. Even that wasn’t nearly quick enough. “The flames cut off the only open door and filled the club with smoke,” explained Blumenthal. “Some victims suffocated so rapidly that they were found with drinks in their hands.”

You may have noticed the phrase “the fire was set” in the above section. It was arson. And it was male pattern violence. Earlier that night, 36-year-old Julio Gonzalez showed up at Happy Land to angrily confront his ex-girlfriend who worked there. He wanted her to “get back” with him. She demanded he leave and she alerted a bouncer. Gonzalez was ejected. Before leaving, he picked up a plastic jug and warned ominously, “I’ll be back.”

Gonzalez filled the jug with $1 worth of gasoline at a nearby service station and returned to Happy Land. ''He threw the gasoline on the floor,'' an NYPD detective told the New York Times. ''He threw in a couple of matches. The fire just crawled in and he left.” Gonzalez soon returned to watch the firemen fight the deadly fire and remove the bodies. Gonzalez’s girlfriend, however, was one of just a handful of Happy Land survivors.

Of course, the blanketing media coverage didn’t focus on the frightening prevalence of male violence — particularly when aimed at females. Instead, the focus seemed to mostly fall on Gonzalez as a Cuban who arrived in the controversial Mariel boatlift of 1980. 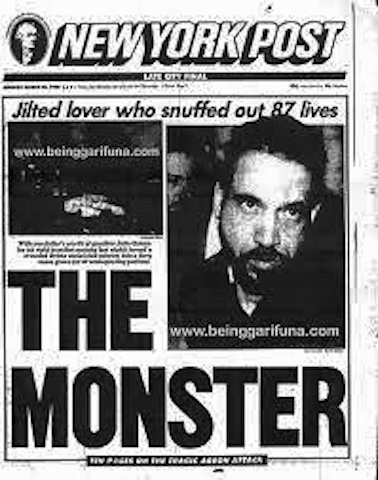 In short order, a shocked and stunned VC staff learned the bad news. We had lost four friends and co-workers. Neil had not been in Happy Land that night but seven of his immediate family members and dozens of his friends had perished. I remember carefully wording signs to place all over the massive health club, basically declaring that it’s “time for us to come together” in a major fundraiser.

Neil’s family and so many others needed money for funeral costs and the shipping of bodies back to Honduras and to temporarily replace the much-needed incomes of those who had died. The usually nightclub-like vibe in the gym grew somber for a few days and countless tears were shed by employees and members.

The VC clientele was the richest of the rich in NYC so I went straight to the source. We remained relentless with the fundraiser until all immediate costs were met (along with some extra pocket money for the bereaved family). As a team, we took turns going to funerals and making family visits. Rafael was charged with the task of delivering the envelopes stuffed with cash to the surviving families.

Then, about a week after the last funeral, we got word that Neil was going to stop by the VC to see us and thank us before making a trip home to Honduras for more funerals here. The typically over-stimulating second-floor gym area grew silent as we gathered around the desk and waited to see our co-worker ascend the stairs.

Neil’s seemingly omnipresent smile was gone. His broad shoulders slumped as he neared us. Ralph, an older supervisor and father figure of sorts, stepped forward to give the first hug and Neil exploded in tears. We all did. I was next in line to hug Neil. His tears soaked my shirt as he whispered, “Mickey, they’re all gone.”

Looking back all these years later, I can now better recognize that the underlying problem remained unnamed (and still does). In all the millions of words printed in newspapers and spoken on TV and shared between friends and family, no one talked about Gonzalez’s maleness. No one offered the context of how a man murdered 87 strangers in the name of punishing a woman for daring to reject his advances. No one discussed how to address the root cause of the terrible Happy Land massacre. That particular event is now relegated to history as yet another “tragedy.”

Coda: I left the VC by that summer but after I was gone, Neil returned to once again work there as a personal trainer. He was, however, fired within a few months when a female gym member reported that he had tried to sexually assault her in the gym’s back stairwell. This heinous transgression does not at all make me second guess the effort I made to help those grieving families way back when. But it does go a long way in explaining why I’ve dedicated myself to a project that only serves vulnerable women.