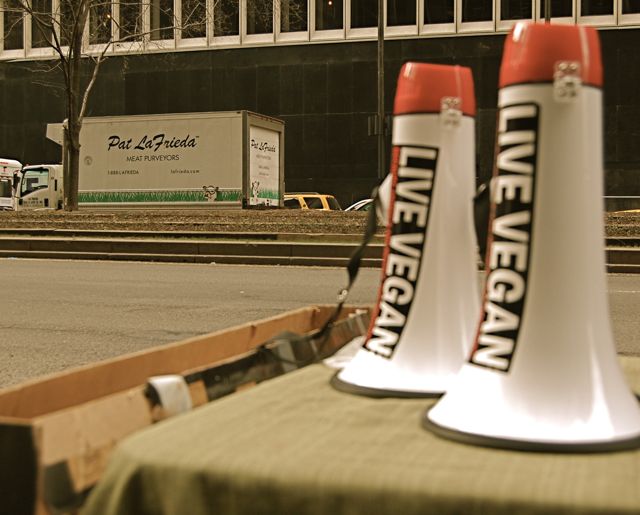 The recent “N-Word” controversy was the first time I’d ever heard of this Paula Deen character so I did a little reading on her. Based on what she’s been accused of and has admitted saying, she certainly deserves the maelstrom of criticism she’s facing. However, once I discovered why Paula Deen was famous, it was clear that long before she publicly shared her predictably racist opinions, she was already a despicable speciesist worthy of our most profound contempt.

From the Chicago Tribune, I learned that Deen “built a business empire based on high-calorie and fried Southern food.” Meanwhile, a New York Times op-ed “explained” how “her manner” is “as sugary as her cooking,” and her smile is “as big as the hams she hawked.”

Now comes word that Deen has been dropped by her longtime partner, Smithfield Foods, because that noble corporation "condemns the use of offensive and discriminatory language and behavior of any kind."

Smithfield, for the record, is the world's number one pork producer, the largest pig farming operation in the United States and a major producer abroad. Smithfield controls 26 percent of the U.S. pork market, raising 14 million pigs at its facilities and killing roughly half the pigs that go to slaughter each year.

FYI: Pork = yet another euphemism for “confined, tortured, and murdered pig.”

Racism is inexcusable but it's not directly responsible for the confinement, torture, and murder of 53 billion land animals per year.

Racism is intolerable but it’s not directly and indirectly responsible for deforestation, topsoil depletion, overfishing, water pollution, corporate control of the food chain, unspeakable animal cruelty, and so much more.

Racism is insupportable but it doesn't consume and destroy one-third of the planet’s land surface.

Racism is indefensible but it isn't the number one source of human-created greenhouse gases (translation: climate change threatening all forms of life on earth).

The privilege/hierarchy that causes all that is speciesism.

A foundation of unspeakable abuse
Obviously, Deen’s racism needs to be exposed and addressed -- and the positive offshoot of her public comments has been the much-needed reminder of how deeply such attitudes remain ingrained within our culture. Thus, since this angle is already being discussed all across the interwebs, I'd like to instead focus on the urgent connections not being made during the current media frenzy.

FYI: If Paula Deen apologized a thousand times for her hate speech, it wouldn't do a damn thing to address any of the 24/7 earth-killing abuse.

Deen & Smithfield: The hidden ingredients
According to VeganPeace.com: "Pigs are very intelligent and learn quickly. They pick up tricks faster than dogs. Pigs rank #4 in animal intelligence behind chimpanzees, dolphins and elephants. Piglets learn their names by two to three weeks of age and respond when called. Pigs are very social animals. They form close bonds with each other and other species. Pigs enjoy close contact and will lie close together when resting. Pigs use their grunts to communicate with each other."

Pig Fun Fact: Did you know a pig could run a seven-minute mile?

Also, contrary to human propaganda, pigs are very clean animals. They keep their “toilets” far from their living or eating area. Even piglets only a few hours old will leave the nest to relieve themselves. However, since pigs don't have sweat glands, they have to roll around in the mud to cool their skin (although, give the choice, they'd prefer water to mud).

This benign biological quirk has doomed the poor pig to having its name used as an insult by humans... thus making it that much easier to for some of those humans to inflict horrendous torture upon them.

Am I being melodramatic when I say “horrendous torture”? Decide for yourself…

The typical slaughterhouse kills more than 1,000 pigs per hour, a rate that practically guarantees that even the most minimal slaughter guidelines are ignored. But even before they reach the killing floor, these beautiful sentient navigate their own trail of tears.

As PETA describes: “More than 170,000 pigs die in transport each year, and more than 420,000 are crippled by the time they arrive at the slaughterhouse. Transport trucks, which carry pigs hundreds of miles through all weather extremes with no food or water, regularly flip over, throwing injured and dying animals onto the road. These terrified and injured animals are rarely offered veterinary care, and most languish in pain for hours; some even bleed to death on the side of the road.”

After an accident in April 2005, Jerry Hostetter, a spokesperson for the aforementioned Smithfield, declared: "I hate to admit it, but it happens all the time."

Serious solution: A collective dismantling and re-imagining of all aspects of the dominant human culture.

All of our grievances -- and solutions -- are connected
The section above contains but a minuscule sampling of the immeasurable brutality visited upon pigs and if you choose to condemn Paula Deen but still eat the food she promoted and the corporations she partnered with, you are voting with your dollars to support the violence. You are also voluntarily damaging your own health.

The average American -- in his/her lifetime -- will consume 24 pigs. Coming along in the deal: cholesterol, saturated fats, pesticides, GMOs, antibiotics, hormones, arsenic (from chicken feed), drug-resistant bacteria, and the frighteningly bad karma of paying someone to torture and kill a beautiful, sentient being so you can eat it. Factor all this (and more) into the equation and you can begin comprehending why we are in the midst of a self-induced health holocaust.

Right about now, someone usually chimes in with something like this: "Yeah, yeah, I know all about that stuff but I'm free to make up my own mind. You eat what you want and I'll eat what I want and we'll stay out of each other's business."

The global animal food (sic) industry is the number one source of human-created greenhouse gases so, um… you better believe that people making choices that speed up climate change is my fuckin’ business.

Forests without trees, oceans without fish, species disappearing at the rate of nearly 200 per day -- all of it, our business.

So yeah, of course you should be free to make up your own mind. All I'm suggesting is that you first choose to free your mind from decades of corporate conditioning.

It's not nearly enough to rise above the latest man-made conflicts and/or differences and proudly declare oneself a "humanist." In the name of holistic justice and planetary rebellion, we must go deeper to identify as earthlings and stand -- fists raised -- in solidarity with all of our fellow earthlings.

Does Paula Deen need to be called on her racism? Absolutely… but obviously, this action is not nearly enough. Not even close.

This isn't about having an activist scorecard or priority list. It's about thinking holistically. It's about avoiding denial. It's about preserving the future.

Racism is undeniably important so if you wanna protest against Paula Deen, let's do it -- but without the single-issue approach.

FYI: All of our grievances and all of our solutions are connected.

If you identify as radical, why eat like a reactionary?

Surrender the privilege of speciesism, embrace empathy for all sentient beings, re-imagine your relationship with the natural world, and allow revolutionary compassion to guide your choices.