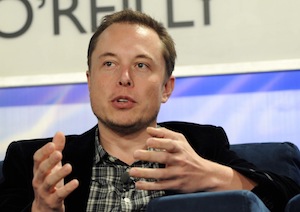 It ought to be sign of just how delusional the nation is these days that Elon Musk of Tesla and Space X is taken seriously.

Musk continues to dangle his fantasy of travel to Mars before a country that can barely get its shit together on Planet Earth, and the Tesla car represents one of the main reasons for it -- namely, that we’ll do anything to preserve, maintain, and defend our addiction to incessant and pointless motoring (and nothing to devise a saner living arrangement).

Even people with Ivy League educations believe that the electric car is a “solution” to our basic economic quandary, which is to keep all the accessories and furnishings of suburbia running at all costs in the face of problems with fossil fuels, especially climate change. First, understand how the Tesla car and electric motoring are bound up in our culture of virtue signaling, the main motivational feature of political correctness. Virtue signaling is a status acquisition racket. In this case, you get social brownie points for indicating that you’re on-board with “clean energy,” you’re “green,” “an environmentalist,” “Earth-friendly.” Ordinary schmoes can drive a Prius for their brownie points. But the Tesla driver gets all that and much more: the envy of the Prius drivers!

This is all horse shit, of course, because there’s nothing green or Earth-friendly about Tesla cars, or electric cars in general. Evidently, many Americans think these cars run on batteries. No they don’t. Not really. The battery is just a storage unit for electricity that comes from power plants that burn something, or from hydroelectric installations like Hoover Dam, with its problems of declining reservoir levels and aging re-bar concrete construction. A lot of what gets burned for electric power is coal. Connect the dots. Also consider the embedded energy that it takes to just manufacture the cars. That had to come from somewhere, too.

The Silicon Valley executive who drives a Tesla gets to feel good about him/her/zheself without doing anything to change him/her/zhe’s way of life. All it requires is the $101,500 entry price for the cheapest model. For many Silicon Valley execs, this might be walking-around money. For the masses of Flyover Deplorables that’s just another impossible dream in a growing list of dissolving comforts and conveniences.

In fact, the mass motoring paradigm in the USA is already failing not on the basis of what kind of fuel the car runs on but on the financing end. Americans are used to buying cars on installment loans and, as the middle class implosion continues, there are fewer and fewer Americans who qualify to borrow. The regular car industry (gasoline branch) has been trying to work around this reality for years by enabling sketchier loans for ever-sketchier customers -- like, seven years for a used car. The borrower in such a deal is sure to be “underwater” with collateral (the car) that is close to worthless well before the loan can be extinguished. We’re beginning to see the fruits of this racket just now, as these longer-termed loans start to age out. On top of that, a lot of these janky loans were bundled into tradable securities just like the janky mortgage loans that set off the banking fiasco of 2008. Wait for that to blow.

What much of America refuses to consider in the face of all this is that there’s another way to inhabit the landscape: walkable neighborhoods, towns, and cities with some kind of public transit. Some Millennials gravitate to places designed along these lines because they grew up in the ‘burbs and they know full well the social nullity induced there. But the rest of America is still committed to the greatest misallocation of resources in the history of the world: suburban living. And tragically, of course, we’re kind of stuck with all that “infrastructure” for daily life. It’s already built out! Part of Donald Trump’s appeal was his promise to keep its furnishings in working order.

All of this remains to be sorted out. The political disorder currently roiling America is there because the contradictions in our national life have become so starkly obvious, and the first thing to crack is the political consensus that allows business-as-usual to keep chugging along. The political turmoil will only accelerate the accompanying economic turmoil that drives it in a self-reinforcing feedback loop. That dynamic has a long way to go before any of these issues resolved satisfactorily.

James Howard Kunstler is the author of many books including (non-fiction) The Geography of Nowhere, The City in Mind: Notes on the Urban Condition, Home from Nowhere, The Long Emergency, and Too Much Magic: Wishful Thinking, Technology and the Fate of the Nation. His novels include World Made By Hand, The Witch of Hebron, Maggie Darling -- A Modern Romance, The Halloween Ball, an Embarrassment of Riches, and many others. He has published three novellas with Water Street Press: Manhattan Gothic, A Christmas Orphan, and The Flight of Mehetabel.