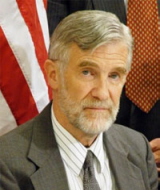 Apr. 6, 2011 (CommonDreams.org) -- The Obama administration’s decision to use a military tribunal rather than a federal criminal court to try alleged 9/11 mastermind Khalid Sheikh Mohammed and four others means the real motives behind the 9/11 attacks may remain obscure.

The Likud Lobby and their allied U.S. legislators can chalk up a significant victory for substantially shrinking any opportunity for the accused planners of 9/11 to tell their side of the story.

For years, President George W. Bush got away with offering up the risible explanation that they “hate our freedoms.” The stenographers of the White House press corps may have had to suppress smiles but silently swallowed the “they-hate-us-for-our-freedoms” rationale.

The only journalist I can recall stepping up and asking, in effect, “Come on; now really; it’s important; why do they really hate us” was the indomitable Helen Thomas.

Helen Thomas took the opportunity to ask why the would-be bomber did what he did. The exchange with Brennan is, hopefully, more instructive than it is depressing -- highlighting a limited mindset still bogged down in bromides.

Thomas: "Why do they want to do us harm? And what is the motivation? We never hear what you find out on why."

Brennan: "Al Qaeda is an organization that is dedicated to murder and wanton slaughter of innocents.... They attract individuals like Mr. Abdulmutallab and use them for these types of attacks. He was motivated by a sense of religious sort of drive. Unfortunately, al Qaeda has perverted Islam, and has corrupted the concept of Islam, so that he's (sic) able to attract these individuals. But al Qaeda has the agenda of destruction and death."

Thomas: "And you're saying it's because of religion?"

Brennan: "I'm saying it's because of an al Qaeda organization that used the banner of religion in a very perverse and corrupt way."

Brennan: "I think this is a long issue, but al Qaeda is just determined to carry out attacks here against the homeland."

Thomas: "But you haven't explained why."

One should, I suppose, be grateful for small favors. At least Brennan did not adduce the they-hate-our-freedoms rationale.

After the Obama administration announced on Nov. 13, 2009, that it intended to try Khalid Sheikh Mohammed in federal court for murder, I wrote an article which began by quoting ACLU attorney Denney LeBoeuf regarding some unpleasant facts, such as torture, that the case was likely to reveal.

“I think that we’re going to shine a light on something that a lot of people don’t want to look at,” LeBoeuf said.

Never much for political correctness, I also went into some detail on the light that might be shed on more plausible reasons why “they hate us” -- Exhibit A being U.S. support for Israel’s oppression of the Palestinians. You will not find much on this in the Fawning Corporate Media (FCM), but there is no lack of evidence.

I included, for example, the findings of a Sept. 23, 2004, report of the Pentagon-appointed U.S. Defense Science Board, which I’d suggest now has additional impact in light of the tumult in the Middle East and Northern Africa:

“Muslims do not ‘hate our freedom,’ but rather, they hate our policies. The overwhelming majority voice their objections to what they see as one-sided support in favor of Israel and against Palestinian rights, and the longstanding, even increasing support for what Muslims collectively see as tyrannies, most notably Egypt, Saudi Arabia, Jordan, Pakistan, and the Gulf States.”

The FCM ignored the Defense Science Board report for two months. Finally, Nov. 24, 2004, the New York Times published a story on the report -- but with some revealing surgery in the above paragraph. The Times quoted the first sentence, but pressed the delete button for the one on what Muslims do object to -- “what they see as one-sided support in favor of Israel and against Palestinian rights....”

The Times story did include the sentence from the original report that immediately followed the (excised) sentence about Israel.  So it was clearly a case of surgical removal of the offending sentence, not merely a need to shorten the paragraph.

Back to Khalid Sheikh Mohammed: As he was being interrogated, the drafters of the 9/11 Commission Report found themselves wondering why he would bear such hatred toward the United States.

They were aware that he earned a degree in mechanical engineering from the University of North Carolina/Greensboro, and speculated that he suffered some kind of gross indignity during his years there.

Not the case, the drafters were told by those with access to the interrogation reports. Rather, the report concludes on page 147:

“By his own account, KSM’s animus toward the United States stemmed not from his experience there as a student, but rather from his violent disagreement with U.S. foreign policy favoring Israel.”

This is among the considerations that prompted the authors to observe later in the Commission report:

“America’s policy choices have consequences. Right or wrong, it is simply a fact that American policy regarding the Israeli-Palestinian conflict and American actions in Iraq are dominant staples of popular commentary across the Arab and Muslim world. … Neither Israel nor the new Iraq will be safer if worldwide Islamist terrorism grows stronger.”

As for Khalid Sheikh Mohammed’s motivation, the neocon editors of the Washington Postwaited a decent interval -- five years -- apparently in hopes that few readers would get as far as page 147 in the 9/11 Commission report, and/or that those who did would have short memories.

On Aug. 30, 2009, the Post cited an unspecified “intelligence summary” for a brand new explanation of his motives:

“KSM’s limited and negative experience in the United States -- which included a brief jail stay because of unpaid bills --almost certainly helped propel him on his path to becoming a terrorist.... He stated that his contact with the Americans, while minimal, confirmed his view that the United States was a debauched and racist country.”

Let’s give the Post the benefit of the doubt. It could be, I suppose, that the above did not come from Khalid Sheikh Mohammed until his 183rd waterboarding session. In any case, the revised explanation of his motives is surely politically more convenient to those wishing to obscure Mohammed’s other explanation implicating “U.S. foreign policy favoring Israel.”

The New York Times article on the Obama administration’s reversal of its earlier attempt to hold key 9/11 trials in a federal court declared in a headline, “White House Gives Up Civilian Court Plan.” But what does the reversal mean?

For one thing, it means there is likely to be far less reportage and publicity than would have been the case in federal criminal court, which normally accommodates a far larger audience. Even plain folks like you and me can go and watch. (In 2009, I attended a U.S. Court of Appeals hearing in D.C. that reversed an earlier decision to release 17 innocent Uighur detainees into the United States from Guantanamo.)

Reduced public access to statements made by the 9/11 defendants was one of the specific reasons cited by Sen. Joe Lieberman and other members of Congress for blocking a federal criminal trial.

"Putting Khalid Sheikh Mohammed in a public courtroom in full view of the public gives him a better platform than any member of al Qaeda has been given to recruit new members,"Lieberman said in February, successfully arguing that funds should be denied for holding such a trial.

In other words, Lieberman wanted to prevent Khalid Sheikh Mohammed and his co-defendants from having an opportunity to explain their actions in a way that the U.S. and world public would get to hear.

With the case handled by a much more tightly controlled military tribunal, the defendants are even surer to be denied that public “platform.”

Even if Mohammed somehow could seize an opportunity, before sentencing, to explain what drove him to conduct the attacks of 9/11, his comments would likely fall like the proverbial tree in the forest.  There might actually be a few journalists within earshot able to listen and report.  But willing?

Favored journalists in attendance would be unlikely to provoke their military hosts or their editors back home by passing along to the readers any inconvenient motives that the defendant might express.

The Guantanamo locale affords the government other distinct advantages. In addition to the fewer attendees, there can be even tighter handling of secrets and the “CLASSIFIED” stamp can be used virtually at will. Transcripts can be heavily censored -- all with very little scrutiny.

The government also can select the attendees. In the past, military officials at Guantanamo have cherry-picked -- and blacklisted -- journalists, depending largely on how obediently they have behaved during earlier cases.

These restrictions -- and the choice of Guantanamo -- are abhorrent to human rights advocates here and abroad. Neocons, though, can breathe easier, since they are reasonably assured of protection against any loud complaints from Khalid Sheikh Mohammed et al. about “U.S. foreign policy favoring Israel.”

Still, the tribunal approach may further delay justice in the 9/11 cases, since the untested tribunal rules will likely be subjected to many more legal challenges than would be the case in the well-worn rules of criminal courts.

ACLU director Anthony Romero has noted that the military commission system is “rife with constitutional and procedural problems,” adding that the Attorney General’s “flip-flop is devastating to the rule of law.”

The Constitution on Life Support

The most serious casualty appears to be the Constitution of the United States, given the dubious fairness of the military commissions and the noxious precedent set by the administration’s reversal. It is possible that some future president might expand their coverage to apply to anyone who is deemed to lend any form of support to “terrorists,” such as perhaps leaking U.S. government secrets.

Kristen Breitweiser, a 9/11 widow and an attorney, wrote that she was given all of two hours “advance notice” regarding the Justice Department’s decision to not prosecute the remaining alleged 9/11 conspirators in an open court of law.

She asked that we all ponder what this decision says about President Barack Obama, the Justice Department, and the United States of America. She provided her own thoughts:

“As for the Department of Justice, it shows their inability to prosecute individuals who are responsible for the death of 3,000 people on the morning of 9/11. Apparently our Constitution and judicial system -- two of the very cornerstones that make America so great and used to set such a shining example to the rest of the world -- are not adequately set up to respond to or deal with the aftermath of terrorism.

“To me, this is a startling and dismal acknowledgment that perhaps Osama Bin Laden did, in fact, win on the morning of 9/11. And chillingly, I wonder whether it wasn't just the steel towers that were brought down and incinerated on 9/11, but the yellowed pages of our U.S. Constitution, as well.”

This article first appeared on Consortiumnews.com.

Ray McGovern works with Tell the Word, the publishing arm of the ecumenical Church of the Saviour in Washington, DC. During his career as a CIA analyst, he prepared and briefed the President's Daily Brief and chaired National Intelligence Estimates. He is a member of the Steering Group of Veteran Intelligence Professionals for Sanity (VIPS).