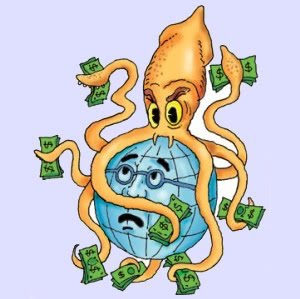 June 22, 2020 (Web of Debt) -- BlackRock is a global financial giant with customers in 100 countries and its tentacles in major asset classes all over the world; and it now manages the spigots to trillions of bailout dollars from the Federal Reserve.

The fate of a large portion of the country’s corporations has been put in the hands of a megalithic private entity with the private capitalist mandate to make as much money as possible for its owners and investors; and that is what it has proceeded to do.

To most people, if they are familiar with it at all, BlackRock is an asset manager that helps pension funds and retirees manage their savings through “passive” investments that track the stock market. But working behind the scenes, it is much more than that. BlackRock has been called “the most powerful institution in the financial system,” “the most powerful company in the world” and the “secret power.” It is the world’s largest asset manager and “shadow bank,” larger than the world’s largest bank (which is in China), with more than $7 trillion in assets under direct management and another $20 trillion managed through its Aladdin risk-monitoring software. BlackRock has also been called “the fourth branch of government” and “almost a shadow government,” but no part of it actually belongs to the government. Despite its size and global power, BlackRock is not even regulated as a “Systemically Important Financial Institution” under the Dodd-Frank Act, thanks to pressure from its CEO Larry Fink, who has long had “cozy” relationships with government officials.

BlackRock’s strategic importance and political weight were evident when four BlackRock executives, led by former Swiss National Bank head Philipp Hildebrand, presented a proposal at the annual meeting of central bankers in Jackson Hole, Wyoming, in August 2019 for an economic reset that was actually put into effect in March 2020. Acknowledging that central bankers were running out of ammunition for controlling the money supply and the economy, the BlackRock group argued that it was time for the central bank to abandon its long-vaunted independence and join monetary policy (the usual province of the central bank) with fiscal policy (the usual province of the legislature). They proposed that the central bank maintain a “Standing Emergency Fiscal Facility” that would be activated when interest rate manipulation was no longer working to avoid deflation. The Facility would be deployed by an “independent expert” appointed by the central bank.

The COVID-19 crisis presented the perfect opportunity to execute this proposal in the United States, with BlackRock itself appointed to administer it. In March 2020, it was awarded a no-bid contract under the Coronavirus Aid, Relief, and Economic Security Act (CARES Act) to deploy a $454 billion slush fund established by the Treasury in partnership with the Federal Reserve. This fund in turn could be leveraged to provide over $4 trillion in Federal Reserve credit. While the public was distracted with protests, riots and lockdowns, BlackRock suddenly emerged from the shadows to become the “fourth branch of government,” managing the controls to the central bank’s print-on-demand fiat money. How did that happen and what are the implications?

Rising from the Shadows

BlackRock was founded in 1988 in partnership with the Blackstone Group, a multinational private equity management firm that would become notorious after the 2008-09 banking crisis for snatching up foreclosed homes at firesale prices and renting them at inflated prices. BlackRock first grew its balance sheet in the 1990s and 2000s by promoting the mortgage-backed securities (MBS) that brought down the economy in 2008. Knowing the MBS business from the inside, it was then put in charge of the Federal Reserve’s “Maiden Lane” facilities. Called “special purpose vehicles,” these were used to buy “toxic” assets (largely unmarketable MBS) from Bear Stearns and American Insurance Group (AIG), something the Fed was not legally allowed to do itself.

BlackRock really made its fortunes, however, in “exchange traded funds” (ETFs). It gained trillions in investable assets after it acquired the iShares series of ETFs in a takeover of Barclays Global Investors in 2009. By 2020, the wildly successful iShares series included over 800 funds and $1.9 trillion in assets under management.

Exchange traded funds are bought and sold like shares but operate as index-tracking funds, passively following specific indices such as the S&P 500, the benchmark index of America’s largest corporations and the index in which most people invest. Today the fast-growing ETF sector controls nearly half of all investments in US stocks, and it is highly concentrated. The sector is dominated by just three giant American asset managers -- BlackRock, Vanguard and State Street, the “Big Three” -- with BlackRock the clear global leader. By 2017, the Big Three together had become the largest shareholder in almost 90 percent of S&P 500 firms, including Apple, Microsoft, ExxonMobil, General Electric and Coca-Cola. BlackRock also owns major interests in nearly every mega-bank and in major media.

In March 2020, based on its expertise with the Maiden Lane facilities and its sophisticated Aladdin risk-monitoring software, BlackRock got the job of dispensing Federal Reserve funds through eleven “special purpose vehicles” authorized under the CARES Act. Like the Maiden Lane facilities, these vehicles were designed to allow the Fed, which is legally limited to purchasing safe federally-guaranteed assets, to finance the purchase of riskier assets in the market. 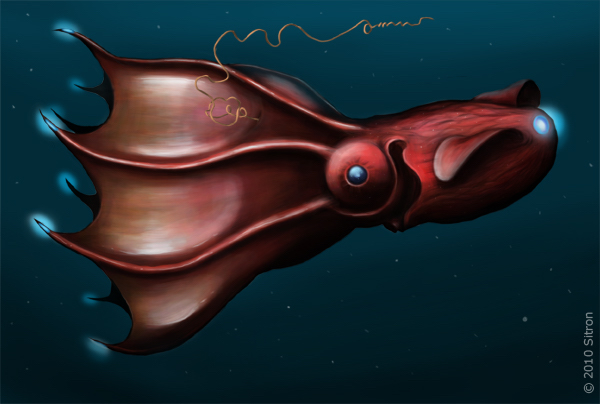 Blackrock Bails Itself Out

The national lockdown left states, cities and local businesses in desperate need of federal government aid. But according to David Dayen in The American Prospect, as of May 30 (the Fed’s last monthly report), the only purchases made under the Fed’s new BlackRock-administered SPVs were ETFs, mainly owned by BlackRock itself. Between May 14 and May 20, about $1.58 billion in ETFs were bought through the Secondary Market Corporate Credit Facility (SMCCF), of which $746 million or about 47 percent came from BlackRock ETFs. The Fed continued to buy more ETFs after May 20, and investors piled in behind, resulting in huge inflows into BlackRock’s corporate bond ETFs.

In fact, these ETFs needed a bailout; and BlackRock used its very favorable position with the government to get one. The complicated mechanisms and risks underlying ETFs are explained in an April 3 article by business law professor Ryan Clements, who begins his post:

Exchange-Traded Funds (ETFs) are at the heart of the COVID-19 financial crisis. Over forty percent of the trading volume during the mid-March selloff was in ETFs ….

The ETFs were trading well below the value of their underlying bonds, which were dropping like a rock. Some ETFs were failing altogether. The problem was something critics had long warned of: while ETFs are very liquid, trading on-demand like stocks, the assets that make up their portfolios are not. When the market drops and investors flee, the ETFs can have trouble coming up with the funds to settle up without trading at a deep discount; and that is what was happening in March.

According to a May 3 article in The National, “The sector was ultimately saved by the US Federal Reserve’s pledge on March 23 to buy investment-grade credit and certain ETFs. This provided the liquidity needed to rescue bonds that had been floundering in a market with no buyers.”

Prof. Clements states that if the Fed had not stepped in, “a ‘doom loop’ could have materialized where continued selling pressure in the ETF market exacerbated a fire-sale in the underlying [bonds], and again vice-versa, in a procyclical pile-on with devastating consequences.” He observes:

BlackRock got a bailout with no debate in Congress, no “penalty” interest rate of the sort imposed on states and cities borrowing in the Fed’s Municipal Liquidity Facility, no complicated paperwork or waiting in line for scarce Small Business Administration loans, no strings attached. It just quietly bailed itself out.

It might be argued that this bailout was good and necessary, since the market was saved from a disastrous “doom loop,” and so were the pension funds and the savings of millions of investors. Although BlackRock has a controlling interest in all the major corporations in the S&P 500, it professes not to “own” the funds. It just acts as a kind of “custodian” for its investors — or so it claims. But BlackRock and the other Big 3 ETFs vote the corporations’ shares; so from the point of view of management, they are the owners. And as observed in a 2017 article from the University of Amsterdam titled “These Three Firms Own Corporate America,” they vote 90 percent of the time in favor of management. That means they tend to vote against shareholder initiatives, against labor, and against the public interest. BlackRock is not actually working for us, although we the American people have now become its largest client base.

In a 2018 review titled “Blackrock -- The Company That Owns the World,” a multinational research group called Investigate Europe concluded that BlackRock “undermines competition through owning shares in competing companies, blurs boundaries between private capital and government affairs by working closely with regulators, and advocates for privatization of pension schemes in order to channel savings capital into its own funds.”

Daniela Gabor, Professor of Macroeconomics at the University of Western England in Bristol, concluded after following a number of regulatory debates in Brussels that it was no longer the banks that wielded the financial power; it was the asset managers. She said:

"We are often told that a manager is there to invest our money for our old age. But it’s much more than that. In my opinion, BlackRock reflects the renunciation of the welfare state. Its rise in power goes hand-in-hand with ongoing structural changes; in finance, but also in the nature of the social contract that unites the citizen and the state."

That these structural changes are planned and deliberate is evident in BlackRock’s August 2019 white paper laying out an economic reset that has now been implemented with BlackRock at the helm.

Public policy is made today in ways that favor the stock market, which is considered the barometer of the economy, although it has little to do with the strength of the real, productive economy. Giant pension and other investment funds largely control the stock market, and the asset managers control the funds. That effectively puts BlackRock, the largest and most influential asset manager, in the driver’s seat in controlling the economy.

As Peter Ewart notes in a May 14 article on BlackRock titled “Foxes in the Henhouse,” today the economic system “is not classical capitalism but rather state monopoly capitalism, where giant enterprises are regularly backstopped with public funds and the boundaries between the state and the financial oligarchy are virtually non-existent.”

If the corporate oligarchs are too big and strategically important to be broken up under the antitrust laws, rather than bailing them out they should be nationalized and put directly into the service of the public. At the very least, BlackRock should be regulated as a too-big-to-fail Systemically Important Financial Institution. Better yet would be to regulate it as a public utility. No private, unelected entity should have the power over the economy that BlackRock has, without a legally enforceable fiduciary duty to wield it in the public interest.

Ellen Brown is an attorney, chair of the Public Banking Institute, and author of 13 books including Web of Debt, The Public Bank Solution, and Banking on the People: Democratizing Money in the Digital Age. She also co-hosts a radio program on PRN.FM called “It’s Our Money.” Her 300+ blog articles are posted at EllenBrown.com.