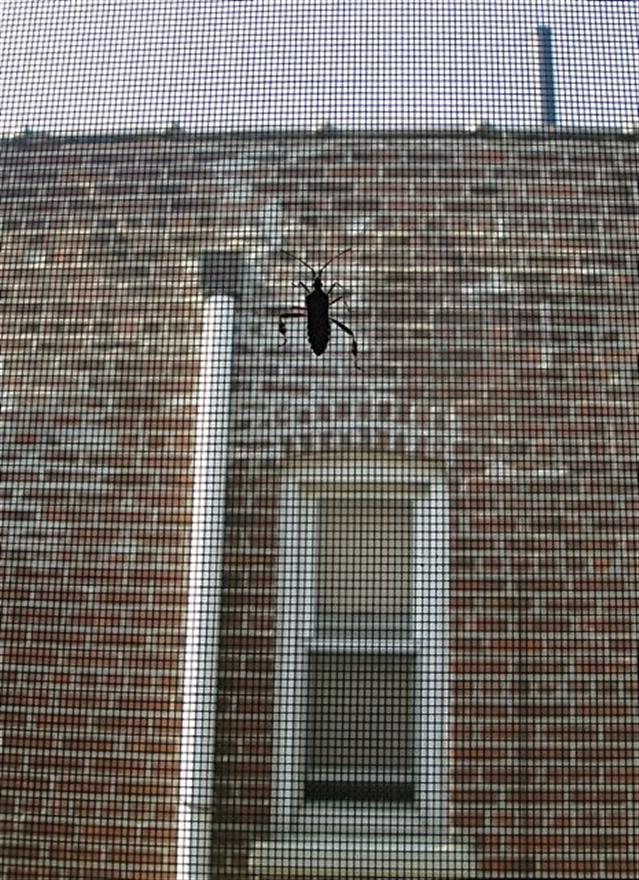 Billions of humans are hungry, industrial propagandists have corrupted our understanding (sic) of nutrition, and much of how we’re programmed to eat is rapidly killing the eco-system. What are we gonna' do?

The United Nations Food and Agriculture Organization (FAO), in its infinite wisdom, suggests we eat insects and the corporate media jumps at the chance to publish articles with oh-so-clever titles like, “Some salt with your spider? U.N. says bugs good for you.”

Pardon me while I try to stop my brain from exploding.

Bugging out
We already live in a culture that demonizes multi-legged creatures like roaches, ants, and spiders -- and thus, a culture already saturated in pesticides and insecticides.

However, instead of addressing the root conditions that create widespread hunger and poverty, we’re told to start factory farms for bugs. We already have genetically-modified insects, can you imagine how badly Monsanto is salivating at the opportunity to mass market GM creatures as both food and feed?

Read between the lines
From a statement related to the FAO report, we learn: "We are not saying that people should be eating bugs. We are saying that insects are just one resource provided by forests, and insects are pretty much untapped for their potential for food, and especially for feed."

As Dan Vergano, in USA Today, explains: The report “calls for making regulations more friendly to bug farming.” It also “suggests chefs can help raise the status of insects by incorporating them into recipes and menus.”

(You want status? Check the Salk quote at the top of this article.)

In addition, the FAO explained how “insect gathering and farming can also offer employment and income generation for people and businesses.”

GM feed for doomed animals, using chefs to raise the status for other doomed creatures, income generation, and yet more corporate-friendly deregulation?

You may begin to wonder if this study was really about feeding hungry humans. Lucky for us, USA Today consulted an “expert on consuming edible bugs.”

Entomologist Doug Yanega, a senior museum scientist at the University of California, Riverside, was happy to clarify: "The U.N. report is perfectly logical, looking at it objectively, but it is tough to convince people."

Hey, when a “scientist” informs us that he’s looked at something “objectively,” who are we to differ?

As Rowan Jacobsen, author of Fruitless Fall: The Collapse of the Honey Bee and the Coming Agricultural Crisis, explains: "Many people will remember that Rachel Carson predicted a silent spring, but she also warned of a fruitless fall, a time when 'there was no pollination and there would be no fruit.'"

That fruitless fall, Jacobsen warns, "has nearly arrived as beekeepers have watched a third of the honey bee population mysteriously die over the past two years."

Colony Collapse Disorder becomes all the more alarming if we comprehend how a fair portion of our food relies on bees at the "critical early stages of its development." Pollinators (such as bees) not only affect 35 percent of the world’s crop production, they increase the output of 87 of the leading food crops worldwide.

Translation: As those “perfectly delicious” bees decline, so does food production for humans and well… you can figure out the rest.

Where do you get your protein?
The FOA also claims, "Insects are a highly nutritious and healthy food source with high fat, protein, vitamin, fiber and mineral content,” and the media has gleefully run with that angle. For example, one article -- while very brief -- still managed to work in both of the phrases: “protein-rich food” and “insects are rich in protein.”

What the corporate media will never tell you: In the U.S., the typical adult ingests 100 grams of protein every day -- roughly 4-5 times the amount recommended by scientists not affiliated with meat and dairy corporations. How did we ever develop this idea that more is better when it comes to protein?

One reason is the scientifically useless and morally indefensible institution of animal experimentation. Since trying to discern biological trends from human to human is often impossible, what makes us think testing done on a rat will lead to any knowledge about our anatomy and physiology?

The breast milk of rats, for example, derives nearly half of its calories from protein. The protein content of human breast milk varies but never rises above 6 percent. Obviously, there’s little useful information to be gained from monitoring the protein needs of rodents. However, many of today’s “experts” are still relying on protein requirement studies done on rats… in 1914.

What about those who believe we need extra protein because we want to run faster, jump higher, or grow bigger and prettier muscles? “Although in the past it was thought that vegetarian and vegan diets might impair athletic performance,” explains Natalie Digate Muth, MPH, RD, “scientists, coaches, and athletes alike now agree that with proper planning a diet without animal products can effectively fuel peak performance.”

In addition, the decidedly mainstream National Academy of Sciences has declared, “There is little evidence that muscular activity increases the need for protein.”

So, how much protein do we need? The American Journal of Clinical Nutrition says 2.5 percent of our daily calories should come from protein. According to the World Health Organization, it’s about 5 percent. How does that work out in grams? A lot lower than the U.S. average of 100 grams a day, that’s for sure.

“An adult male on a fast only puts out 4.32 grams of urinary nitrogen per day,” says William Harris, M.D., author of The Scientific Basis for Vegetarianism. “Each gram represents 6.25 grams of broken down protein, so under conditions in which some protein is actually being catabolized and used for fuel, only about 4.32 x 6.25 = 27 grams/day are actually needed.” Twenty-seven grams.

Translation: Step away from the insects…

The climate, she is a-changin’
One article on the FAO study did touch on the environmental impact of eating animals, informing us that insects produce “a fraction of emissions such as methane, ammonia, and greenhouse gases compared to other animals.”

For the record, the No. 1 one source of human-created greenhouse gases is the global animal by-products industry, e.g. factory farming. Raising -- and genetically modifying -- insects as feed for those doomed animals while the most desperate humans chow down on cicadas is not gonna change that or help the ecosystem.

Another dose of reality: The vast majority of what we eat directly and indirectly involves unspeakable animal cruelty, exploited human labor, a human health holocaust, the privilege of speciesism, and irreversible environmental damage.

The first step towards changing all that is to break free of pervasive corporate programming and recognize, for example, that GMOs have not been proven safe, there is no nutritional need for humans to consume animals or insects, and there’s a huge price to be paid for our widespread ignorance and denial.

We must learn to co-exist with all species within the natural world, the source of our existence. We must stop acting as if we are the last generation of humans. If not, we will perish -- and take many, many other species with us.

Rather, the planet and all life on it needs for us to surrender the privilege of speciesism, embrace empathy for all sentient beings, allow compassion to guide our choices, and cultivate a new vision for the future -- a vision of holistic justice and total liberation.

NYC EVENT: Join Mickey Z. (after the March Against Monsanto) at Washington Square Park for a teach-in called “Food Justice, GMOs, & the Vegan Option (Eat Like a Revolutionary)”: Saturday, May 25, 2013 @ 3pm.

Mickey Z. is the author of 11 books, most recently the novel Darker Shade of Green. Until the laws are changed or the power runs out, he can be found on an obscure website called Facebook.