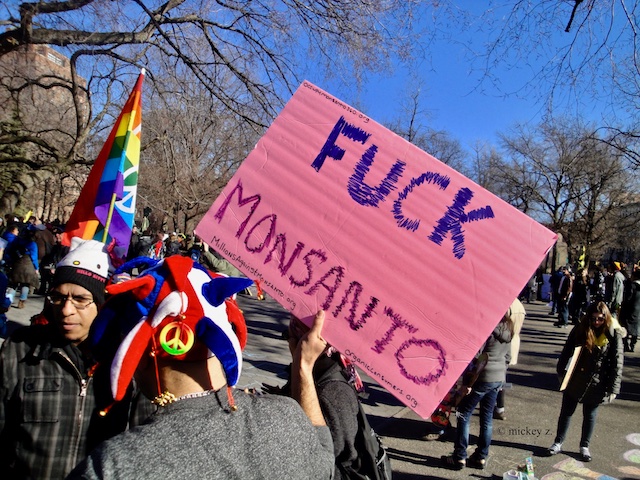 Almost ten years ago, there was a ubiquitous two-word chant you’d hear loudly echoing through any and every Occupy Wall Street event: “Fuck Monsanto!” Sure, Monsanto has been re-packaged in Bayer wrapping since then, but the sentiment holds. Folks on the left were justifiably skeptical of official “scientific” advances (sic). It was widely accepted that corporate power, corporate propaganda, and corporate science presented (and still present) an ominous threat to our shared eco-system and all forms of life. As a result, the annual “March Against Monsanto” once drew millions of angry rebels in cities across the globe.

Today — less than a decade later — smug liberal Biden voters are publicly united with the radical remnants of Occupy and BLM in promoting the sentiment #BecauseScience. No longer does the #woke left vociferously condemn what is produced in secrecy inside corporate laboratories. On the contrary, they go out of their way to shut down and censor any questioning of mainstream "science" narratives. The crowd that once grew hoarse from screaming “Fuck Monsanto” has now transformed itself into an unpaid PR team for Moderna. 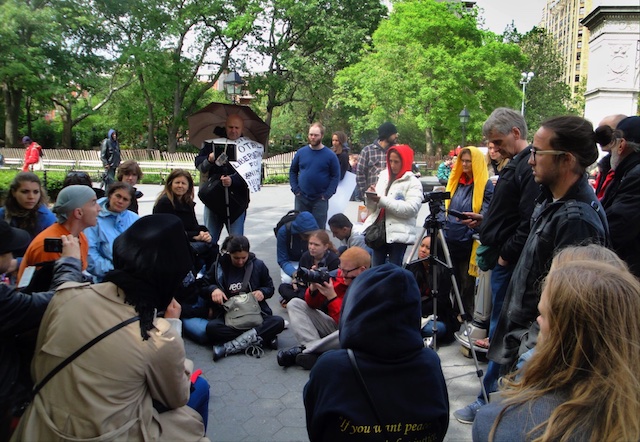 Let’s juxtapose these two paradigms, shall we? Whenever I spoke to massive crowds about GMOs, etc., I’d remind the audience that Monsanto was not a food company. Monsanto was a chemical company that made its name selling, for example, saccharin to Coca-Cola and Agent Orange to the U.S. military (which is really you and I since the bulk of our federal tax dollars always go toward war). Monsanto’s products also include PCBs, dioxin, DDT, and rBGH. Prior to merging with Bayer, the company recorded annual sales of roughly $11.8 billion and operated 404 facilities in 66 countries, over six continents with products grown on more than 282 million acres worldwide. Monsanto was one of three corporations (along with DuPont and Syngenta) that controlled 70 percent of the global seed market — aiming for monopoly power over the planet’s food and water supplies. It’s no wonder everyone outside of the far-right and libertarians was outraged.

Meanwhile, in 2021: The same lefties who took Monsanto (and many other corporations) to task are cheerleading for a vaccine that was created in less than a year. To offer such unquestioning support, liberals and radicals have to downplay the fact that the average vaccine has previously taken about 7 to 10 years to go from collecting viral samples to licensing a drug. Until now, the fastest vaccine ever approved (and considered successful) was for the mumps. That took four years (1963 to 1967).

What about the companies entrusted with our health and safety? Has Moderna (one of the Big Pharma members that received huge government subsidies) ever brought a vaccine to market prior to 2020? No. Does Pfizer have a history of bribing doctors to use their products? Yes, they do. Regardless, is the U.S. left marching in virtual lockstep under the banner of “because science”? Yes… indeed it is. 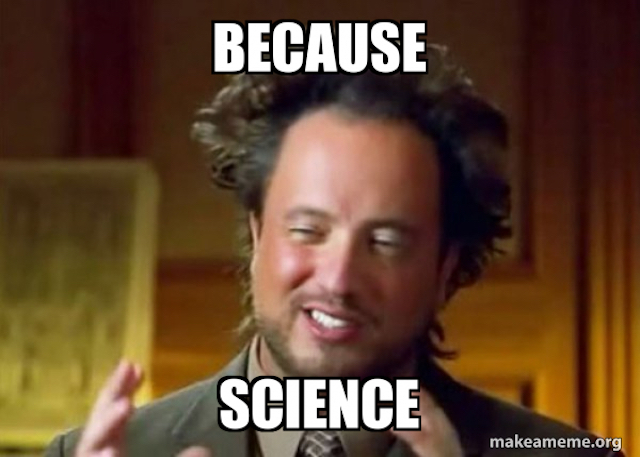 Back to Monsanto: GMO is short for “genetically modified organism” and is the result of corporate scientists taking genes from one species and inserting them into another species in an attempt to obtain a desired trait or characteristic. GMOs are also known as “transgenic organisms” and the process is often called “genetic engineering” or GE. Examples of genetic engineering include:

All of this and so much more is still happening even though our current understanding of the way DNA works remains limited. Any change to DNA can have side effects that are impossible to predict or control. Still, the industry forges on, e.g. 94 percent of soy is GM, 90 percent of cotton, 88 percent of corn, and 95 percent of sugar beets. Reality: 80 percent of processed food contains at least one GM ingredient. It’s no wonder everyone outside of the far-right and libertarians was outraged.

Meanwhile, in 2021: The “fuck Monsanto” crowd is pushing its way to the front of the line to receive a vaccine that utilizes technology never before approved for humans. The first two COVID-19 vaccines approved for “emergency use” (Pfizer and Moderna) use mRNA (or “messenger” RNA) technology. Here’s how the Centers for Disease Control and Prevention (CDC) explains this novel approach:

“mRNA vaccines take advantage of the process that cells use to make proteins in order to trigger an immune response and build immunity to SARS-CoV-2, the virus that causes COVID-19. In contrast, most vaccines use weakened or inactivated versions or components of the disease-causing pathogen to stimulate the body’s immune response to create antibodies.”

“There is a race to get the public vaccinated, so we are willing to take more risks,” Tal Brosh, head of the Infectious Disease Unit at Samson Assuta Ashdod Hospital, told The Jerusalem Post. Brosh acknowledged that there are “unique and unknown risks to messenger RNA vaccines, including local and systemic inflammatory responses that could lead to autoimmune conditions.” Brosh expressed concern that the “warp speed” aspect would leave some important questions left unanswered. “We will have a safety profile for only a certain number of months, so if there is a long-term effect after two years, we cannot know,” he said.

If the Food and Drug Administration (FDA) eventually has to pull the current vaccines from the shelves, it will come as no surprise. Firstly, there is the obvious lack of long-term safety studies. Also, it’s what the FDA does. It rushes medicines and devices out to please Big Pharma. And then, each and every year, it recalls an average of 4,500 of these products. You would think the same people who challenged Monsanto would be up in arms. You would be wrong. 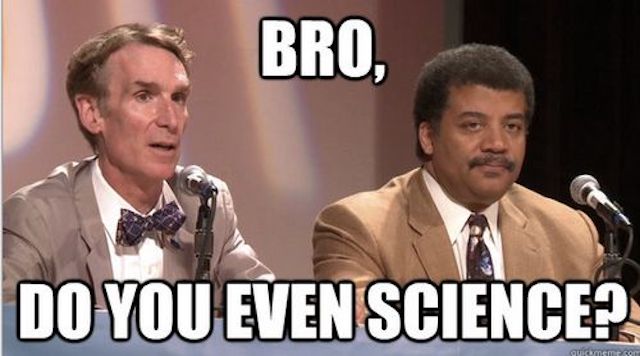 Back to Monsanto: In 2009, Michael Taylor was appointed by President Barack Obama to the position of deputy commissioner for Foods at the FDA. Taylor was also vice president for public policy at Monsanto, which means he was in charge of GMOs being put into our food supply. It’s no wonder everyone outside of the far-right and libertarians was outraged.

Meanwhile, in 2021: The chief advisor of the Operation Warp Speed project was Moncef Slaoui. A few things to consider about Dr. Slaoui:

The New York Times reported that Dr. Slaoui was not a federal employee and was instead “working under a $1 contract that exempts him from federal rules that would require him to list his outside positions, stock holdings, and other potential conflicts.”

Two watchdog groups — Public Citizen and Lower Drug Prices Now — said Slaoui’s $1 contract appeared “designed primarily to allow Slaoui to maintain an extensive web of conflicting financial interests without the need to divest of, recuse from or disclose those conflicting interests” and “provides Slaoui with the opportunity to enrich himself, his colleagues and his employers.” FYI: Somehow, none of this has inspired a #woke March Against Moderna.

Back to Monsanto: The FDA does not require a single safety study for GMOs, does not mandate the labeling of GMOs, and allows companies to put GM foods onto the market without even notifying the agency. You might even say we are the test. GMOs were introduced into the American food supply in 1996 and within nine years, the percentage of Americans with three or more chronic illnesses jumped from 7 percent to 13 percent while food allergies skyrocketed. It’s no wonder everyone outside of the far-right and libertarians was outraged.

Meanwhile, in 2021: The left appears to be blissfully unaware of the track record of vaccines. For example, did you know that about 18 vaccines have been recalled just since 2006? While I urge you to please take some time to do your own research on the history of vaccine problems and side effects, to follow are a few examples to get you started:

The above examples are very much worth considering today because they occurred under the normal timeline of such efforts. With COVID-19, everything was accelerated by at least 400 percent — without a peep from the revolutionaries.

Back to Monsanto: And then there was what was euphemistically known as the “Monsanto Protection Act.” Thanks to the Farmer Assurance Provision, Section 735, of a spending bill passed in March 2013, even if an individual or group were to bring suit against a GM company, no action could be taken until an “Environmental Impact Statement” (EIS) is compiled — and this typically takes years. Translation: The product suspected to be dangerous stays on the market until the EIS inevitably declared it safe. It’s no wonder everyone outside of the far-right and libertarians was outraged.

Meanwhile, in 2021: Adverse vaccine events are categorically dismissed by, well… almost everyone (including liberals, leftists, and radicals). Article after article denies any possible connection to the vaunted vaccines. When an elderly person gets sick or dies (any time since March 2020), the immediate, accepted assumption is death-by-Covid. When an elderly person dies after getting the vaccine, we’re told to eschew immediate assumptions — even as the numbers rise.

The Monsanto Protection Act caused an uproar. Meanwhile, in 2021, laws have been put in place to prevent us from suing a vaccine company should we suffer from their errors or their greed. Thanks to the PREP Act, we cannot sue the FDA for authorizing a rushed drug or sue our employer if they mandate vaccination as a condition for employment (whether that vaccine is safe or not).

You would think all those who denounced Trump and the right and declared themselves to be open-minded, humane, and seeking to support the common man would never endorse such totalitarian behavior. You would be wrong. Condescending leftists of all stripes deem anything but pro-vaccine groupthink to be “conspiracy theory” or “anti-science.”

To my eyes, it appears some alternative version of “Trump derangement syndrome” has provoked the left into an illogical and dangerous “the enemy of my enemy is my friend” state of mind. If Trump and his increasingly irrational base wanna downplay science and ignore mitigation tactics, then it must be #woke AF to go overboard with the opposite approach. As a result, we live in a topsy-turvy world in which the right is skeptical of vaccines, masks, the CDC, and other expressions of mainstream expert-ism. Conversely, the left hive mind is actively thought-policing and censoring its own ranks — bullying them to obey government and/or corporate authority or else risk being canceled. 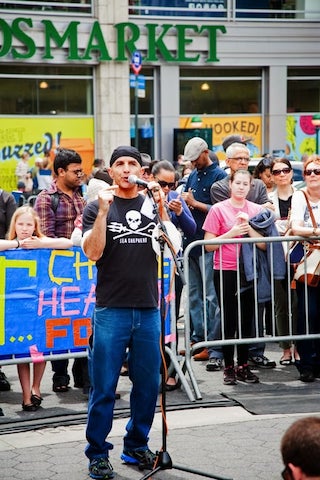 Me, speaking at the 2014 March Against Monsanto to an estimated 3,500 people in Union Square Park (Credit: Tyko Kihlstedt)

Just seven years ago, some 3,500 folks lined up to hear me deconstruct Monsanto. Meanwhile, in 2021, in my own little corner on Facebook, the only posts of mine that consistently get pushback are those that suggest even a hint of caution about a vaccine that was rushed and uses a brand new technology. The types of views that once would’ve garnered me scores more subversive followers are now more likely to make Republicans click “like.” To call this scenario Orwellian does not do it justice. Perhaps the proper term is Zuckerbergian.