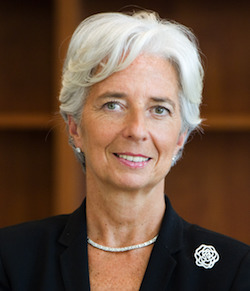 Dec. 19, 2016 (Bloomberg) -- Christine Lagarde was convicted of negligence by a Paris court over her handling of a multimillion-euro dispute during her time as France’s finance minister nearly a decade ago, raising questions about her role as head of the International Monetary Fund.

The 60-year-old managing director of the IMF won’t face a fine or prison term, Judge Martine Ract-Madoux said Monday. The judges on the Cour de Justice de la Republique, which specializes in ministerial misconduct, said that Lagarde should have done more to overturn a 285 million-euro ($300 million) payout to a businessman in an arbitration case.

The trial has been an ongoing distraction to Lagarde’s duties at the IMF, which was on the front lines of the effort to combat the global financial crisis and provides billions of dollars in loans to countries at risk of default. The Washington-based institution said after the ruling that it would meet shortly to consider the verdict.

“Of course, Lagarde has been set back by this verdict,” Michael Fuchs, a deputy parliamentary caucus leader of German Chancellor Angela Merkel’s party, said in an interview. “What the consequences will be is hard to say.”