Hey Radicals: Veganism is Much More Than an 'Option' | Mickey Z. 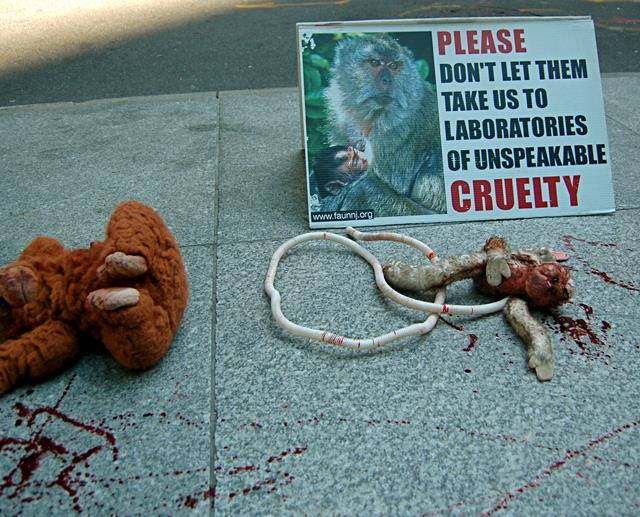 All of the above are heinous and insidiously intertwined manifestations of a dominant culture constructed on the foundation of privilege and hierarchy… but only one of them is directly responsible for the murder of 53 billion land animals per year.

Only one of them is directly responsible for deforestation, topsoil depletion, overfishing, water pollution, corporate control of the food chain, unspeakable animal cruelty, and so much more.

Only one of them consumes and destroys one-third of the planet’s land surface.

Only one of them is the number one source of human-created greenhouse gases (translation: climate change threatening all forms of life on earth).

This most prevalent and dangerous of all privileges is, of course, speciesism.

Have it your way?
The above “rant” came to mind while recently perusing a livestream originating from just outside Gezi Park in Turkey. The streamer, along with several activists was taking a meal break at -- wait for it -- Burger King!

The irony, the denial, the hypocrisy makes me swoon…

By coincidence, as a speaker at National Animal Rights Day on June 9, I told a facetious story about entering a Burger King restaurant to demand it “my way”-- as per the company’s long-time catchphrase.

So, please allow me to re-visit that concept because my way would most certainly include my radical comrades recognizing the need to surrender the privilege of speciesism, e.g. not making side trips to death emporiums like Burger King during a protest or occupation.

Speciesism is a privilege. To surrender that privilege (or any privilege) is a revolutionary act.

Check your options
My way would also mean an end to the practice of offering a “vegan option” at radical events. So often I’ve witnessed meat-eating activists reduce speciesism to a single pasta dish amidst all the animal by-products masquerading as “food.”

Imagine if I organized a large gathering at which racist language was the norm but in one small corner of the park, we provided the option of a non-racist zone.

Imagine if I organized a large gathering at which sexist and homophobic behavior was the norm but in one small corner of the park, we provided the option of a safe space.

Imagine if I organized a large gathering at which non-accessibility was the norm but in one small corner of the park, we provided the option of a tiny wheelchair-friendly zone. Oops… that already happens 99 out of 100 times.

Check yourself before you wreck yourself
As an active member of several radical groups and larger movements, I am understandably expected to check my white male privilege -- and I genuinely strive to do my imperfect best.

Conversely, as a high profile vegan/animal rights activist within these groups and movements…

It’s fascinating how many “activists” who wouldn’t dream or dare uttering racist-sexist-homophobic language think it’s hilarious to make bacon jokes. Here’s a minute sampling of what they’re laughing about:

If you're working to dismantle corporate power, expand freedoms, and create a safer, more sane culture, you already have plenty in common with animal rights activists. Why not take things even further and recognize that the mighty 99% also includes non-human animals -- and the entire ecosystem itself?

If you identify as radical, why are you eating like a reactionary?

Surrender the privilege of speciesism, embrace empathy for all sentient beings, re-imagine your relationship with the natural world, and allow revolutionary compassion to guide your choices.