Greed and Consumption: Why the World is Burning | Ramzy Baroud 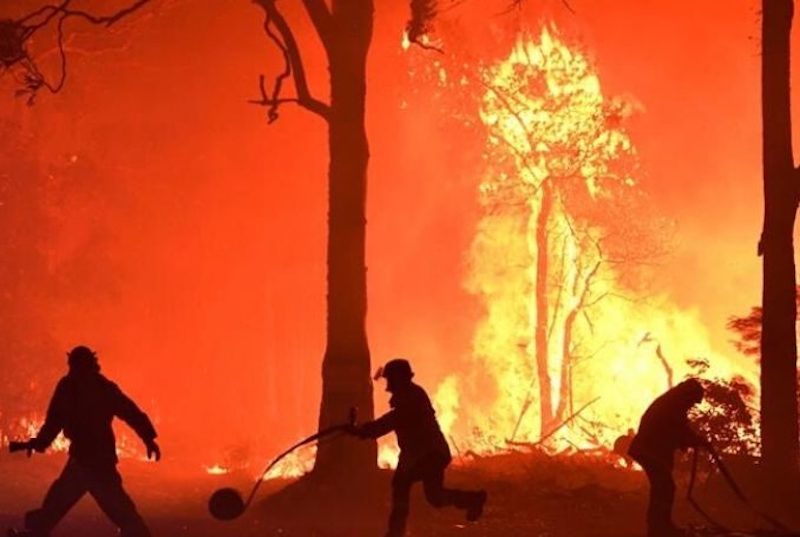 NSW Fire and Rescue officers fight a bushfire encroaching on properties in Australia in December 2019. (Photo: via AJE)

Rome is scorching hot. This beautiful city is becoming unbearable for other reasons, too. Though every corner of the beaming metropolis is a monument to historical grandeur, from the Colosseum in Rione Monti to the Basilica of Saint John Lateran in San Giovanni, it is now struggling under the weight of its own contradictions.

In Via Appia, bins are overflowing with garbage, often spilling over into the streets. The smell, especially during Italy’s increasingly sweltering summers, is suffocating.

Meanwhile, many parts of the country are literally on fire. Since June 15, firefighters have reportedly responded to 37,000 fire-related emergencies, 1,500 of them on July 18 alone. A week later, I drove between Campania, in southern Italy, and Abruzzo, in the center. Throughout the journey, I was accompanied by fire and smoke. On that day, many towns were evacuated, and thousands of acres of forests were destroyed. It will take months to assess the cost of the ongoing destruction, but it will certainly be measured in hundreds of millions of euros.

Additionally, the entire southern Europe is ablaze, as the region is experiencing its worst heat waves in many years. Greece, Spain, Turkey, and the Balkans are fighting fires that continue to rage on.

Across the Atlantic, the United States and Canada, too, are desperately trying to battle their own wildfires, mostly direct outcomes of unprecedented heatwaves that struck North America from Vancouver to California, along with the whole of the American northwest region. In June, Vancouver, Portland and Seattle all set new heat records, 118, 116 and 108 Fahrenheit, respectively.

While it is true that not all fires are a direct result of global warming -- many in Italy, for example, are man-made -- unprecedented increases in temperature, coupled with changes in weather patterns, are the main culprits of these unmitigated disasters.

The solution is more complex than simply having the resources and proper equipment to contain these fires. The impact of the crises continues to be felt for years, even if temperatures somehow stabilize. In California, for example, which is bracing for another horrific season, the devastation of the previous years can still be felt.

“After two years of drought, the soil moisture is depleted, drying out vegetation and making it more prone to combustion,” The New York Times reported on July 16. The problem, then, is neither temporary nor can be dealt with through easy fixes.

As I sat with my large bottle of water outside Caffettiamo Cafe, struggling with heat, humidity and the pungent smell of garbage, I thought about who is truly responsible for what seems to be our new, irreversible reality. Here in Italy, the conversation is often streamlined through the same, predictable and polarized political discourse. Each party points a finger at the others, in the hope of gaining some capital prior to the upcoming October municipal elections.

Again, Italy is not the exception. Political polarization in Europe and the United States constantly steers the conversation somewhere else entirely. Rarely is the problem addressed at a macro-level, independent from political calculations. The impact of global warming cannot and must not be held hostage to the ambitions of politicians. Millions of people are suffering, livelihoods are destroyed, the fate of future generations is at risk. In the grand scheme of things, whether the current mayor of Rome, Virginia Raggi, is elected for another term or not, is insignificant.

Writing in the Columbia Climate School website, Renee Cho highlights the obvious, the relationship between our insatiable appetite for consumption and climate change. “Did you know that Americans produce 25 percent more waste than usual between Thanksgiving and New Year’s Day, sending an additional one million tons a week to landfills?” Cho asks.

This leads us to think about the existential relationship between our insatiable consumption habits and the irreparable damage we have inflicted upon mother earth.

Here in Via Appia, the contradictions are unmistakable. This is the summer sales season in Italy. Signs reading “Saldi” -- or “Sale” -- are everywhere. For many shoppers, it is impossible to fight the temptation. This unhinged consumerism -- the backbone and the fault line of capitalism -- comes at a high price. People are encouraged to consume more, as if such consumption has no repercussions for the environment whatsoever. Indeed, Via Appia is the perfect microcosm of this global schizophrenia: people complaining about the heat and the garbage, while simultaneously consuming beyond their need, thus creating yet more garbage and, eventually, worsening the plight of the environment.

Collective problems require collective solutions. Italy’s heat cannot be pinned down on a few arsonists and California’s wildfires are not simply the fault of an ineffectual mayor. Global warming is, in large part, the outcome of a destructive pattern instigated and sustained by capitalism. The latter can only survive through unhindered consumption, inequality, greed and, when necessary, war. If we continue to talk about global warming without confronting the capitalist menace that generated much of the crisis in the first place, the conversation will continue to amount to nil.

In the final analysis, all the conferences, pledges and politicking will not put out a single fire, neither in Italy nor anywhere else in the world.