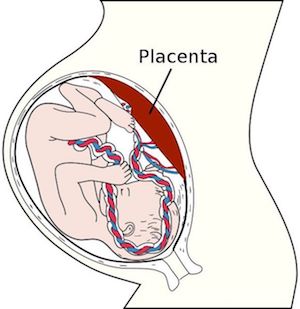 Fetus in utero, between fifth and sixth months. Image credit: Wikipedia.May 28, 2018 (MedicalXpress) -- Hiding in plain sight, new research shines a spotlight on the placenta's critical role in the nature versus nurture debate and how it confers risk for schizophrenia and likely other neurodevelopmental disorders including ADHD, autism, and Tourette syndrome.

This new scientific frontier, with far-reaching implications for maternal and child health, creates the possibility that scientists can more accurately predict who is at risk of mental illness, and develop strategies to prevent or lessen their occurrence by increasing the resiliency and health of the placenta.

The study, "Convergence of placenta biology and genetic risk for schizophrenia," was led by researchers at the Lieber Institute for Brain Development and published in Nature Medicine. "For the first time, we have found an explanation for the connection between early life complications, genetic risk, and their impact on mental illness and it all converges on the placenta," said Daniel R. Weinberger, who led the team of investigators on the study and is CEO of the Lieber Institute for Brain Development (LIBD).

In contrast to prior studies that focused on how genes related to behavioral disorders directly alter prenatal brain development, this novel research found that many genes associated with risk for schizophrenia appear to alter early brain development indirectly, by influencing the health of the placenta. The research showed that these genes are "turned on" in the placenta during complicated pregnancies and signal a placenta under duress.