Extreme Vetting, But Not for Banks | Matt Taibbi 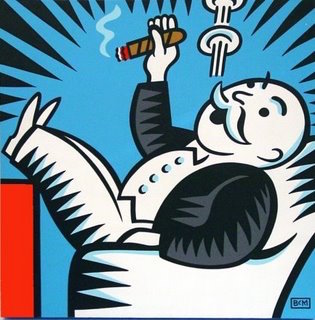 Trump proves he is a tool for Wall Street after all

Feb. 3, 2017 (Rolling Stone) -- Donald Trump, the man who positioned himself as the common man's shield against Wall Street, signed a series of orders today calling for reviews or rollbacks of financial regulations. He did so after meeting with some friendly helpers.

Here's how CNBC described the crowd of Wall Street CEOs Trump received, before he ordered a review of both the Dodd-Frank Act and the fiduciary rule requiring investment advisors to act in their clients' interests:

Dimon, Schwarzman, Fink and Cohn collectively represent a rogues gallery of the creeps most responsible for the 2008 crash. It would be hard to put together a group of people less sympathetic to the non-wealthy.

Trump's approach to Wall Street is in sharp contrast to his tough-talking stances on terrorism. He talks a big game when slamming the door on penniless refugees, but curls up like a beach weakling around guys who have more money than he does.

The two primary disasters in American history this century (if we're not counting Trump's election) have been 9/11 and the 2008 financial crisis, which cost 8.7 million people their jobs and may have destroyed as much as 45 percent of the world's wealth.