Dear world, I’m sorry for being such a vegan | Mickey Z. 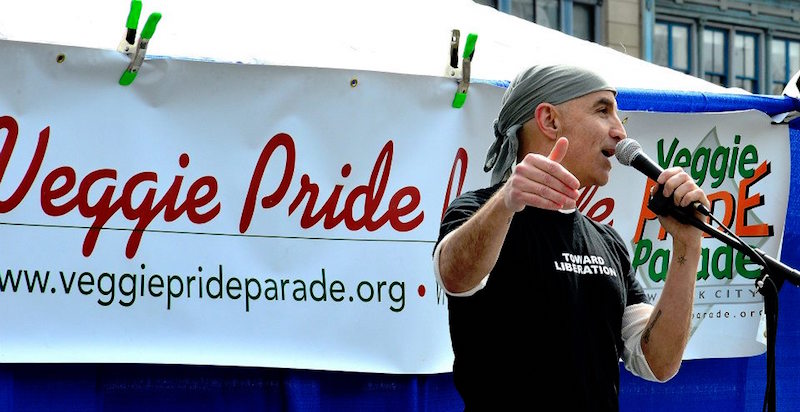 You know, the keynote speaker each year at the Veggie Pride Parade, the guy with the raised fist and a million vegan-related articles and talks and protests under his belt and…well, I could continue for a while with my lengthy resume but it’s not as if any of my activism has done a damn thing to make a difference.

Either way, I’m not here to boast. I’m here to apologize.

My heart was in the right place. Really, it was. I may have behaved like an asshole at times but it was never my intention (if that means anything). That’s the only excuse I can honestly offer so, with that out of the way, let’s get this thing started before I change my mind.

I’m sorry for misleading people
Since I wasn’t your average, everyday plant eater, people -- lots of people -- heard me when I repeated over and over again: “It’s so easy to go vegan.” Many, many of them took the leap, thanks to my persuasiveness. But this choice is not easy: financially, nutritionally, psychologically, or culturally. It’s also not “natural,” not revolutionary, and it’s not for everyone. It’s just as tricky as any diet, but I chose to not acknowledge this reality.

For example, in all my articles and talks and workshops and teach-ins and videos, it wasn’t until spring 2015 that I even mentioned the concept of a food desert.

Not until last summer did I discover and share essential information from Jack Norris, a well-respected dietician and the co-founder of Vegan Outreach. When asked for his thoughts as to why so many vegans think they don’t need to supplement, Norris replied: “Because they want to think that the vegan diet is natural. Many vegans believe that a vegan diet is the most natural and, therefore, the healthiest, and so everyone should stop harming animals and live an Eden-like existence. I understand the appeal of this, but the evidence that humans evolved as vegans is simply not there, not to mention the important fact that what is ‘natural’ is not necessarily what is the healthiest. But this cuts both ways. The vegans who want to base their nutrition on a return to Eden are no sillier, in my opinion, than the paleo dieters who want to return to hunter-gatherer times.” (I suggest all vegans -- and their knee-jerk haters -- re-read that Norris quote again.)

Let’s face facts, kids, there’s a reason why 84 percent of vegans and vegetarians return to meat and it’s not because they’re weak, stupid, or cruel. Homo sapiens did not evolve as herbivores and thus, careful dietary analysis and supplementation is required for you to have any chance at staying healthy (in a 2016/capitalism kind of way). This effort requires steady access to nutritional information as it evolves, the ability to procure proper supplements and quality food, and last but not least: enough disposable income to afford such a lifestyle. I apologize for each and every time I said it was inherently a safe and easy choice.

I’m sorry for believing and then sharing questionable statistics
“Fifty-one percent of human-created greenhouse gases are caused by the global animal by-products industry.” I wish I had a buck for every time I robotically repeated that dubious factoid (it’s not as if I made any money off being such a high profile vegan). Unfortunately, that stat is based on a single study (which, as far as I can find, wasn’t even peer-reviewed). Equally as unfortunate is that an entire propaganda film is virtually based on a stat that’s based on a single study that has been widely questioned and challenged. (Yeah, as a vegan, I became quite adept at endorsing any single study that “proved” my point while calling singular studies that contradicted me "inconclusive," by definition.)

Animal agriculture contributes mightily to climate change and many other forms of eco-devastation but so does all agriculture… and every other major industry within a modern capitalist society. I wasn’t wrong for asking (more like demanding, actually) that people focus on the impact of factory farming on our shared environment, but I was beyond delusional to insinuate that “going vegan” could bring us back from the brink of eco-collapse. Personal choices play virtually no role in creating large scale, sustainable social change. So yeah, I apologize for being one those jerks who said stuff like, “there’s no such thing as a meat-eating environmentalist” (and basically discrediting any activist who ate meat).

I’m also sorry for using “facts” and “statistics” garnered from some the big “animal rights” groups. This includes the misogynist, racist hypocrites at PETA, of course, but also other high profile organizations (too many to list here). I did several events, for example, in conjunction with Sea Shepherd Conservation Society and lauded their work without ever taking the time to learn about their leader and how their whale-saving claims are very much open to debate. I apologize for imposing my blind faith on others.

And I’m sorry for the countless times I repeated the classic canard: “Veganism saves lives.” Yeah, I was that guy -- the one posting Facebook statuses like: “Go vegan and no one gets hurt.” (Cue the shame and self-loathing)

In a 2015 article, I included two sentences that were roundly challenged: “All the overpriced plates of seitan, kale, and beans you and your vegan crew share photos of on Instagram will never lead a slaughterhouse owner to release some of his doomed captives. The best you can boast might be that theoretically, if enough humans eschewed animal by-products, some future doomed captives may never be born because breeding may have to be slowed.”

The most common rebuttal (sic) arrived in the form of an article entitled, “400 Million Fewer Animals Were Killed for Food in 2014 Because People Eat Less Meat.” However, it took me a matter of minutes to discover that some manipulation was afoot. Is the article even technically accurate? Probably not, as there’s no proof of the “Because People Eat Less Meat” part. Is the article misleading? No doubt.

According to a Humane Society chart, the annual number of animals slaughtered has been incredibly high for the past two decades and has remained relatively steady since the year 2000 (even with an apparent decline in red meat consumption in the United States). By choosing to compare the years 2007 and 2014, the veggie crowd found the best possible spin for their public relations. However, if you peruse the numbers, you’ll see that a meat industry hack could accurately spin a more timely article called something like: “Vegetarian Agenda in Decline Since 2012.”

Also, there’s no clarity as to whether “number of animals slaughtered” correlates to “number of animals bred” and what happens to animals that are bred but not immediately slaughtered. Finally and crucially, since it appears meat consumption is on the rise outside the United States, this is likely yet another example of vegans willfully ignoring how capitalism works. Even with the occasional drop-off in consumption here, these multi-national corporations will offset it elsewhere as the overall death count rises (see: tobacco industry).

Do I want fewer animals slaughtered, less meat consumed, and global factory farming smashed? Of course I do (and so should you). Will I fool myself and others with “statistics” to declare that all this is already happening? Not anymore. I apologize for doing so in the past.

I’m sorry for too many things to list
I could go on and on about things like my fixation on the concept of “speciesism”; loudly touting the rare vegan or even vegetarian athlete as “proof” (of what, I’m not certain) while conveniently ignoring the 99 percent of successful pro athletes who eat meat; dismissing the latest research on plant intelligence and behavior; using the patently false term “cruelty-free,” and so much more. But please allow me to skip ahead to my primary acts of contrition:

I’m sorry for my horribly insensitive language choices
During my vegangelical years, I loudly and regularly and even flippantly compared the abuse of non-humans to rape, slavery, and the Holocaust. For that, I deeply apologize.

I’m sorry for all the self righteous public shaming
In order to perceive an un-natural choice as natural and to desperately fend off an 84 percent defection rate, it becomes necessary (sic) for vegans to view their lifestyle choice as a form of moral superiority. To go vegan is to not only have all the science on your side but it’s also the only way to corner the market on compassion.

Everyone else? They are often portrayed as complicit in mass murder. They are mocked, guilted, judged, slandered, and shamed. Someone doesn’t just buy a pair of UGGs boots, they gleefully celebrate the pain inflicted on sheep in the making of such footwear. Why else would anyone purchase a dog from a breeder if it wasn’t to find boundless joy in the suffering of puppy mill mothers? We’re surrounded by barbarians!

Let’s hold more ineffectual “protests” and share more sarcastic memes and scream at more women (yes, it’s almost always women who face the rage of the animal rights crowd) who dare to defy our decrees. That’ll prove how compassionate we are and then maybe eight out of 10 of us won’t abscond from the ranks in the next year or two! Right?

So, most of all, I apologize for acting as if 95 percent of humans are sadists -- and using my platform to effectively convince others to do the same.

I’m not sorry for this article
Nothing I’ve written here should come as news to anyone. There’s a reason why vegans are so universally reviled and I assure you, it’s not because they’re all misunderstood visionary revolutionaries, way ahead of their time.

That said, I’m sure plenty of you are itching to assure me that none of your friends behave like this. (None, you claim!) Hey, I personally know some amazing humans who happen to follow a plant-based lifestyle but sorry, that doesn’t alter the overall reality. As someone who was immersed in the inner circle of veganism for two decades, I can speak from vast personal experience. So please spare me and everyone else the “not all vegans” defense.

Instead of reflexively lashing out, I hope some vegan/animal rights types will try a little brutal honesty in their outreach. Talk about the challenges, stop demanding absolute purity and the “all or nothing” approach, teach yourself about nutrition so you can knowledgeably answer valid questions, cease all talk about how many animals your diet choice has “saved,” and -- while you’re at it -- check the counterproductive self-righteousness at the door. The noble struggles for animal liberation and against factory farming might then finally have a chance to lure in much-needed allies, from all walks of life.

Each of us is wrong far more often than we’re right. This fundamental realization may be what finally helps to connect us before it’s too late -- and perhaps it can all begin with a round of heartfelt apologies.

Mickey Z. is the author of 13 books, most recently Occupy these Photos: NYC Activism Through a Radical Lens. Until the laws are changed or the power runs out, you can “like” his Facebook page here and follow his blog here.

"Dear world, I’m sorry for being such a vegan" by Mickey Z. is licensed under a Creative Commons Attribution-ShareAlike 4.0 International License.
Based on a work at http://worldnewstrust.com/dear-world-i-m-sorry-for-being-such-a-vegan-mickey-z.