Capitalism is ending because it has made itself obsolete, former Greek finance minister Yannis Varoufakis says | Tom Embury-Denni 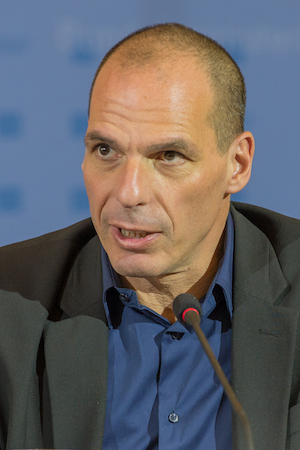 Yanis VaroufakisOct. 18, 2017 (Independent) -- Former Greek finance minister Yanis Varoufakis claims capitalism is coming to an end because it is making itself obsolete.

The former economics professor told an audience at University College London that the rise of giant technology corporations and artificial intelligence will cause the current economic system to undermine itself.

Mr Varoufakis, who took on EU institutions over Greek debt repayments in 2015, said companies such as Google and Facebook, for the first time ever, are having their capital bought and produced by consumers.

“Firstly the technologies were funded by some government grant; secondly every time you search for something on Google, you contribute to Google’s capital,” he said. “And who gets the returns from capital? Google, not you.

“So now there is no doubt capital is being socially produced, and the returns are being privatised. This with artificial intelligence is going to be the end of capitalism.”

Warning Karl Marx “will have his revenge”, the 56-year-old said for the first time since capitalism started, new technology “is going to destroy a lot more jobs than it creates."