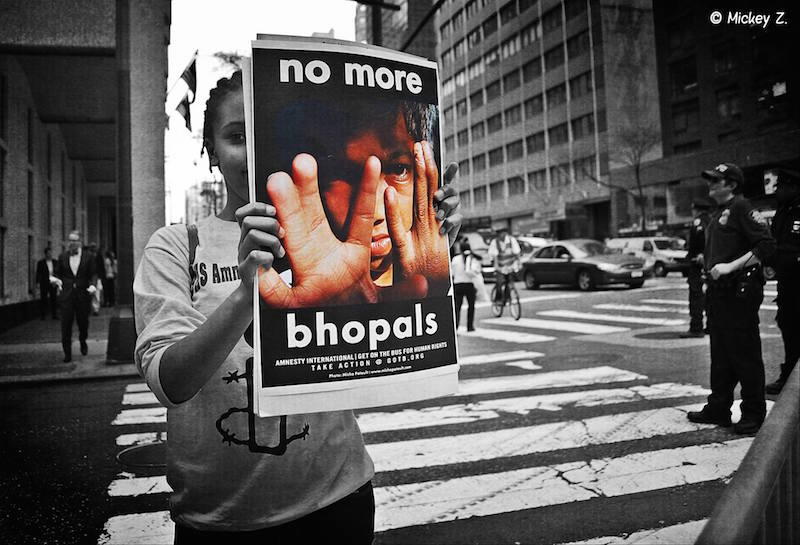 “If you believe in corporate accountability, environmental health and justice, social justice, reproductive justice, human rights and a toxic-free future for all, the Bhopal gas disaster is an issue that should matter to you.”

What does the name “Bhopal” mean to you?

Considered to be the world’s worst industrial disaster, here’s a brief description of the events of Dec. 2-3, 1984, from the Bhopal Medical Appeal: “On the night of Dec. 2nd, 1984, a Union Carbide plant in Bhopal, India, began leaking 40 tons of the deadly gas methyl isocyanate. None of the six safety systems designed to contain such a leak were operational, allowing the gas to spread throughout the city of Bhopal. Half a million people were exposed to the gas and 25,000 have died to date as a result of their exposure. More than 150,000 people still suffer from ailments caused by the accident and the subsequent pollution at the plant site. These ailments include blindness, extreme difficulty in breathing and gynecological disorders.”

“In addition to the dead, hundreds of thousands were injured, and thousands more deal with lingering maladies,” writes Kyeann Sayer at TreeHugger.com. “Children born years later face reproductive problems and physical malformations. The original settlement between Union Carbide and India did not quantify these effects, and current definitions of corporate liability do not include them. Victims continue to struggle for redress from the Indian government and Dow Chemical (who bought Union Carbide).”

How has Union Carbide/Dow gotten away with this atrocity and why aren’t more global activists talking about Bhopal? What’s being done on the ground right now as the 30th anniversary of this disaster approaches? What can we do to help?

To help answer these and other questions, I reached out to my friend Reena Shadaan, a member of the International Campaign for Justice in Bhopal-North America's (ICJB-NA) Coordinating Committee, a group that focuses on bringing the Bhopalis struggle for justice and a toxic-free future to North America.

Reena is also completing her MA in Gender Studies and Feminist Research at McMaster University, and has degrees in Social Work and Development Studies from York University (Toronto, Canada) where she carried out research on Bhopali women’s activism and empowerment in the aftermath of the Bhopal gas disaster.

“Learning about the struggle from the perspective of women-activists, who have been the sustaining force in this 30-year struggle, taught me a great deal about activism and solidified my commitment to environmental justice,” Shadaan explains.

Besides her work with ICJB-NA, Reena intends to continue research work on women's environmental justice activism. In the midst of all this, she took a break to do an interview with me. Our conversation went a little something like this…

Mickey Z.: What type of work are you currently doing with International Campaign for Justice in Bhopal-North America (ICJB-NA)?

At ICJB-North America, our role is strictly solidarity. We try to bring the struggle of Bhopalis to North America, and carry out campaign actions that are decided on by the Bhopali leaders of the movement. This is important in any transnational movement. We don’t make the decisions, those at the grassroots level do.

MZ: In the vocabulary of eco-disasters and corporate criminality, even casual observers are familiar with "Chernobyl" and "Three Mile Island" and "Agent Orange" and "Love Canal." However, I don't see "Bhopal" as having the same recognition. Do you agree? If so, to what would you attribute this situation?

RS: My colleague, Ryan Sparrow, from McMaster University brought this up the other day. It has a lot do with the wider political atmosphere. Chernobyl is used as an example in the United States because it represents a failure of the Soviet Union. Bhopal, on the other hand, is linked to an American corporation and represents the failures of capitalist-driven development. Bhopal doesn't serve the interests of capital, so mainstream media can ignore it.

Love Canal, Three Mile Island and Agent Orange have gained quite a bit of attention in the U.S. because those that were/are affected work tirelessly to challenge the mainstream narrative. Of course, it's also true that those impacted by Love Canal, Three Mile Island, and many veterans that were exposed to Agent Orange are all U.S.-based, meaning it is easier to gain national attention. That being said, these stories continue to be silenced, as are all the environmental justice issues happening in the United States. This is partly because the communities most impacted are racialized, indigenous and working class. The credit goes to those activists who have worked tirelessly to challenge the official narrative and silencing by mainstream media.

MZ: Your answer makes it all the more impressive to consider three decades of diligent and difficult work being done in the name of justice for Bhopal. Against all odds, activists have remained mobilized and focused. Can you tell us a little about what’s going on as the 30-year anniversary approaches?

RS: Yes, it's been three decades of mobilization against what is now the second biggest chemical corporation in the world and the Government of India. As the 30th anniversary approaches, much of the wider goals remain the same (assessment and clean-up of the site, holding the Dow Chemical Company accountable legally, etc.); however, many important successes have been won as well. For instance, after more than 10 years of mobilization on contaminated groundwater, the survivors' groups succeeded in getting the government to supply clean water and infrastructure (taps) in the communities. Fifty thousand residents can now access clean water. That was a huge success, and it never would have happened without the sustained work of the groups on the ground. Just days ago, five Bhopali survivors were on indefinite, waterless hunger strike, and after five days, the Government of India conceded to their demands.

The 30th anniversary is a reminder that nothing is won without struggle, and we can’t underestimate the power of solidarity in keeping the struggle going. Many groups around the word, including The Association for India’s Development (AID) and Amnesty International, are planning actions in solidarity around the anniversary this year.

MZ: Can you tell us more about how this struggle has been sustained by women activists?

RS: Like many environmental justice movements, women are the driving force behind this struggle. They occupy community and top tier leadership roles, engage in decision-making and act as spokespersons. These women are also providing an example to their daughters and granddaughters, who are taking this struggle into the next generation. There's a great photo gallery on this here.

MZ: How can people reading this learn more, get involved, support such work, and become allies in the struggle for the justice in Bhopal?

RS: If you believe in corporate accountability, environmental health and justice, social justice, reproductive justice, human rights and a toxic-free future for all, the Bhopal gas disaster is an issue that should matter to you. It's been 30 years of struggle, and survivors are yet to see justice. This disaster continues to be the world's worst industrial disaster, therefore achieving justice in Bhopal will set an important legal precedent, and hopefully "no more Bhopals" worldwide. To get involved, contact This email address is being protected from spambots. You need JavaScript enabled to view it., and for more information, visit www.bhopal.net.

Mickey Z. is the author of 12 books, most recently Occupy this Book: Mickey Z. on Activism. Until the laws are changed or the power runs out, he can be found on the Web here. Anyone wishing to support his activist efforts can do so by making a donation here.

©WorldNewsTrust.com -- Share and re-post this story. Please include this copyright notice and a link to World News Trust.