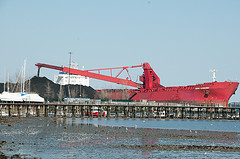 The BDI dropped to 530 Friday, 24 points below a previous record in July and August, 1986, the Baltic exchange reported. The London-based exchange publishes rates on more than 50 trade routes.

Economists expect that China's economy will grow this year at the lowest rate since 1990. The shipping capacity of dry-bulk ships expanded 60 percent in the past five years, according to IHS Maritime data compiled by Bloomberg.