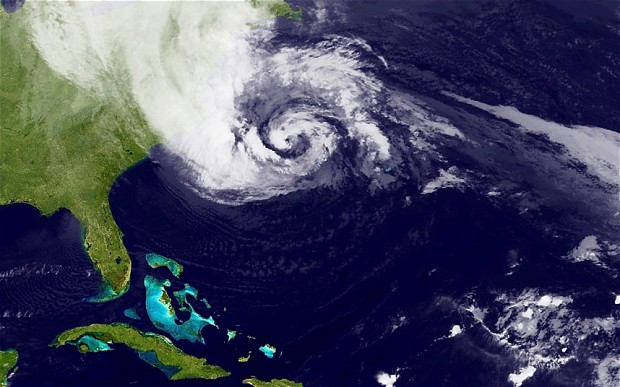 A satellite image of Hurricane Sandy, pictured at 00:15 UTC, churns off the east coast of the US Photo: NASA via Getty Images

With little to do while waiting for something possibly very bad to happen people tend to get jokey.

That was how I felt about the election until Hurricane Sandy came along. For one thing, I happened to travel (by car -- how else?) last week from Bennington through Brattleboro, Vt., and down into a de-industrialized corner of northwestern Massachusetts. There were at least three major highway bridge re-construction projects (and many lesser ones) still underway along the route from last year's Hurricane Irene, which devastated Vermont.

There's a fair chance that Vermont will get whacked again, undoing a billion dollars of work along the same mountain river roads. How demoralizing will that be? And where does the local share of the money come from?

I remember, too, being in Wilkes-Barre, in Eastern Pennsylvania just a few years ago and seeing that the city never actually recovered from floods induced by Hurricane Agnes in 1972, which coincided with the beginning of the end of the local coal industry. The downtown was functionally dead, with a zombie overlay of social services, wig shops, and street people conversing with themselves. It appears that Hurricane Sandy is going to rip through the same region again, then curl east into my part of upstate New York and finally slog into the same new England states that got bashed last year.

Then, of course, there is the question of what happens to New York City in the next 48 hours, a potential enormity too vast to quantify from here (not to mention Washington DC, Philadelphia, Baltimore, Wilmington, and the toxic waste dump formerly known as New Jersey).

My own main worry, sitting here in comfort, in a well-lighted room, is how widespread the electric power outages might be and how long might they last -- conceivably even through the election. Surely, Mr. Obama is pacing nervously now in some deep underground White House command center, worrying about what might be required if there is no electricity to run the voting machines across the nation's most populous region, or if many hundreds of thousands of voters get stranded at home by broken bridges and washed-out roads, or how many votes his government might lose if the juice stays on but he can't relieve the anticipated misery fast enough... with the idiot Romney kibitzing from the sideline.

I don't know if the United States can take that kind of disruption and come out the other side the same way it went in. The systems that keep us going are already in trouble, some of them already teetering, like the airline industry, which can barely keep going with jet fuel clocking at 40 percent of its operating costs due to $90-a-barrel oil. The political system itself is more fragile than we might suppose, despite the seemingly despotic reach of surveillance, the size of the government payroll, and the amazing complacency of the sports-and-fructose-saturated public. Few believe in the two major parties, or what they pretend to stand for, including many officers and foot-soldiers in those parties. If the system finds itself unable to hold an election on the day specified by the constitution, what happens then? Another trip to the Supreme Court. Uh-oh....

Anyway, Hurricane Sandy and all it portends this Monday morning is a nice distraction from all the other things un-winding, tottering, and fracturing in so many advanced nations. Promises of massive (and improbable) bailouts have kept the financial meltdown of Europe a few degrees below critical mass for a couple of months, but the thermometer is inching upward with the ominous Catalan regional election in Spain tipping well toward the secessionists, and Greece whirling around the economic drain, with all of its previous bail-out money merely yo-yoing back to the client banks of the "troika" that arranged the bail-outs, and countries like Italy, Portugal, and Ireland whistling past the graveyard beyond the news media's peripheral vision. And then there is China with its government transition hugger-mugger, its empty make-work cities, its crony banking system unaccountable to anyone, and its extremely modest reserves of its own oil to run the whole hastily constructed shootin' match. They have been working earnestly in plain sight -- off the news media's radar screen -- to construct a resource extraction empire in Africa, but then they will be stuck with the job of defending 12,000-mile supply lines. Good luck with that.

Finally, there is the nauseating spectacle of the presidential election itself, with two creatures of corporate capture pretending to represent the interests of some hypothetical majority who wish to remain the slaves of WalMart and Goldman Sachs. If Hurricane Sandy causes such massive disruption as to interfere with the election, perhaps that will be a good thing -- a sudden, unavoidable re-thinking of our ossified institutional customs, and a thrust into the emergent history of the future.