Another World Is Possible... Except At Mealtime? | Mickey Z. 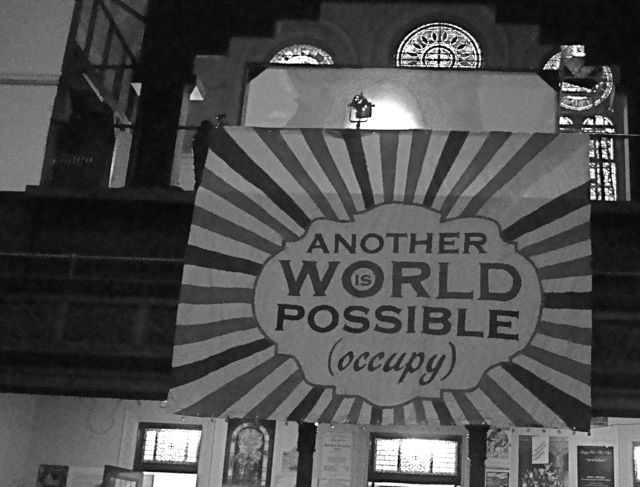 "There is no way to overstate the magnitude of the collective spiritual transformation that will occur when we shift from food of violent oppression to food of gentleness and compassion."

In a recent article of mine, I posed the following queries to my non-vegan comrades:

What if I told you that I knew a way you could oppose unspeakable animal cruelty, stand up for exploited human workers, help address a human health holocaust, work to reduce the profits and control of the 1%, surrender the hierarchical privilege of speciesism, and do your part to defend the eco-system before it’s too late?

What if I added that this choice also addresses deforestation, topsoil depletion, overfishing, water pollution, rapid species extinction, the proliferation of GMOs in our food supply, and so much more?

What if I then informed you that you could do all this 24 hours a day and still have plenty of time for many other forms of protest and dissent?

As an activist -- a revolutionary, even -- I’d imagine you’d be practically drooling. Right?

Unfortunately, for way too many of you, the only thing you drool for is… (wait for it) bacon. You know who you are. You think pizza is dreamy, vegans are annoying, and you diligently delude yourself with tall tales of being “too busy helping humans” to care about animals.

In other words, in your eyes: Another world is possible… except at mealtime.

For those of you dwelling in such deadly denial, I offer a few examples of the hypocrisy on your plate:

Workers rights
If you call yourself a human rights activist, I’d urge you to examine how your food choices detrimentally impact the working class you claim you want to help. Inside the slaughterhouses, for example, the animals are not the only ones suffering. The meat industry, along with its low wages, long hours, and dehumanizing work, has the highest job-related injury rate and by far the highest rate of serious injury -- and at least half the workers are women.

Of course, with many undocumented immigrants and poor Americans working such jobs, it remains unknown how many injuries go unreported.

Prison/Industrial Complex
Whether you call it a cage, a cell, a jail, a pen, a ward, a prison, a wildlife center, or an enclosure… incarceration is incarceration. A culture that confines and abuses animals for profit is highly likely to regularly promote and engage in other forms of violence and exploitation.

Here’s a little of what most of us regularly omit when thinking about zoos:

Slavery
Whenever someone uses the word “slavery,” it almost automatically conjures up images of the African slave trade, the Middle Passage, and plantations in the American South.

In other words, the word and the concept of slavery are not and have never been exclusively reserved for African-Americans.

In fact, the word and the concept of slavery should not and should never be exclusively reserved for humans. For example:

To declare that these examples (and far too many more to detail here) do not constitute slavery is to betray one’s speciesist bias and expose a glaring compassion blind spot.

Modern human debt slaves in Asia endure a vastly different experience than, say, African slaves on a plantation in 1825. To acknowledge this reality doesn’t make either oppressed human more or less of a slave.

Similarly, to call an animal a “slave” is not to imply that the animal’s experience is indistinguishable from that of a human slave. It is to simply acknowledge that a sentient creature is being confined and abused in the name of someone else’s profit.

Wall Street
Occupying Wall Street means much more than creating clever memes about Goldman Sachs. The global animal agribusiness is a supremely powerful entity within the corridors of power. That’s precisely why this earth-killing industry is salivating over “free trade” agreements like the Trans-Pacific Partnership (TPP) that allow them to pressure countries to eliminate import safety standards and eliminate tariffs on U.S. meat, dairy, and egg exports.

Among many other nightmares, this means: More animals suffering on factory farms, more climate change and factory farm pollution, more destruction of rainforests for livestock feed, more diabetes, heart disease, and cancer in the global South, and more outbreaks of deadly diseases like bird flu and swine flu, and dig this: it means more countries shifting to factory farming in order to stay competitive, which means game over for the eco-system.

Rape Culture
All across the planet -- 24 hours a day -- “artificial insemination” is the norm for the dairy industry. Here’s how the folks at HumaneMyth.org explain it:

“All forms of dairy farming involve forcibly impregnating cows. This involves a person inserting his arm far into the cow’s rectum in order to position the uterus, and then forcing an instrument into her vagina. The restraining apparatus used is commonly called a ‘rape rack’.”

Despite all this (and so much more), when the word “rape” is used to define such practices, it is often met with indignation by those claiming this word is the sole domain of humans -- non-male humans, almost exclusively.

But if we can all agree that, say, the rape of a man in prison is not identical to the far more prevalent rape of women (or any non cis male), why should the use of this word remain off limits to the unique circumstances of, say, a giant panda or dairy cows?

To use the word “rape” when discussing the forced insemination of a non-human does not invalidate or downplay the horrific trauma of human rape. To declare otherwise is to betray one’s speciesist bias and expose a glaring compassion blind spot.

GMOs
There are so many ways our speciesist culture intersects with Monsanto -- far more than I could detail here -- but for now, please consider this: 65 percent of grains -- the vast majority of which is GM -- are fed to the 53 billion land animals murdered for “food” each year by an industry that is systematically destroying our landbase. FYI: These animal “food” products are also not labeled as genetically modified.

Environment
What does your beloved burger have to do with being an environmentalist, you ask? Let’s begin with this: The number one source of human-created greenhouse gases (read: climate change) is the global animal by-products industry -- factory farming, the meat-and-dairy-based diet.

Let’s re-cap: Each year, 65 percent of untested GM grains are fed to 53 billion doomed land animals in an industry that eats up one-third of the land surface on the planet and is the number one source of human-created greenhouse gases but somehow you’re a meat-eating “environmentalist”?

In the narration of the essential film, Earthlings, we’re told:

“By analogy with racism and sexism, the term ‘speciesism’ is a prejudice or attitude of bias in favor of the interests of members of one’s own species and against those of members of other species … Like us, (animals) are the psychological centers of a life that is uniquely their own. What these animals are due from us, how we morally ought to treat them, are questions whose answer begins with the recognition of our psychological kinship with them.”

If you claim to be working towards a non-hierarchical society, reject speciesism.

If you call yourself an activist, reject speciesism.

If you have a shred of compassion in your heart, stop with the fuckin’ bacon jokes and reject speciesism.

You can’t have it both ways, comrades, and the time is long overdue to decide: Which side are you on?

All of our grievances -- and our solutions -- are connected…