After Trayvon: 40 Reasons to Hit the Streets Every Day | Mickey Z. 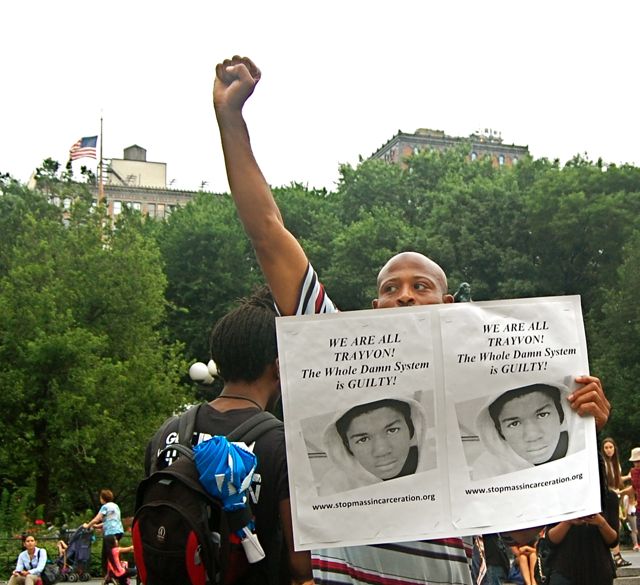 “Find out just what any people will quietly submit to and you have the exact measure of the injustice and wrong which will be imposed on them.”

Reason #2: Women earn 77 cents for every dollar a man is paid.

Case in point: the murder of Trayvon Martin. A young black male, dressed in a manner that reflects the popular culture, is promptly profiled and stalked by a Hispanic man. A confrontation is provoked, the Hispanic man produces a gun, and yet another young black male is killed.

Also ready to obediently hit their mark and dutifully read their lines are the part-time activists (am I being redundant?) who justifiably -- but predictably -- take to the streets after the verdict is announced for a few days of “outrage.” For 48-72 hours or so, chants of “No justice, no peace” will echo. Those in power will welcome such accepted “dissent” as proof that free speech reigns supreme here in god’s country.

Reason #5: Every 20 seconds, a child dies as a result of poor sanitation. This means 1.5 million preventable deaths each year.

The final chapter in this episode of White Supremacy Theater will feature leaders (sic) on all sides calling for “calm” while the corporate media readies their “protest turns violent” headlines to obscure the fact that every single minute of every single day within our culture is a clear and present act of violence.

Reason #6: The U.S. Department of Defense -- the interventionist institution formerly known as the War Department -- is the biggest polluter on Planet Earth, for example, releasing more hazardous waste than the five largest U.S. chemical companies combined. To add insult to injury, the world's worst polluter also gobbles up 54 percent of U.S. taxpayer dollars.

I’m not suggesting we don’t express outrage or we don’t hit the streets. I am suggesting, however, that we step out of the impotent role this culture expects and allows us to occupy. Feeling and expressing outrage over the Zimmerman verdict is warranted and necessary. But where’s the daily, hourly outrage as the dominant paradigm threatens us and threatens all forms of life?

By now, you’ve likely caught on that I’ve been offering some urgent and salient motivations to express outrage. For the remainder of this article, please allow me to introduce a bunch more reasons to hit the streets -- and stay there:

Reason #8: In the United States, 2660 children are born into poverty every day.

Reason #9: More than a decade after the U.S.-led invasion, Afghanistan has the highest infant mortality rate in the world -- 257 deaths per 1,000 live births -- while 70 percent of the population lacks access to clean water.

Reason #12: Eighty-one tons of mercury is emitted into the atmosphere each year as a result of global electric power generation.

Reason #13: In Pakistan, it's been found that one in seven U.S. drone strikes result in a child fatality.

Reason #14: Forty-four percent of the U.S. death row population is African-American (an ethnic group that constitutes only 12.6 percent of the nation’s people as a whole).

Has any emotion been stirred?

Reason #25: Every 28 hours, in the United States, a black person is killed by a police officer, security guard, or self-appointed vigilante.

Is it possible you’ll tear yourself away from your smart phone long enough to recognize that we’ve reached the point of no return?

Reason #28: The annual worldwide use of pesticides is 500 billion tons.

Reason #29: The meat- and dairy-based diet is the number one source of annual worldwide human caused greenhouse gas -- all in the name of an industry also responsible for unspeakable animal cruelty, an epidemic of preventable human diseases, exploited human labor, the destruction of one-third of the planet’s land surface, and more control/profit for the 1%.

Reason #30: Under-nutrition contributes to five million deaths of children under five each year in developing countries.

Do you believe those most responsible for the current state of affairs will voluntarily change their behavior any time soon? If not, when will you step up?

Reason #32: The planet's leading cause of human death and illness is diarrhea and 88 percent of these deaths are directly linked to a lack of access to safe water.

Reason #33: Ninety percent of the large fish in the ocean are already gone.

Reason #34: Eighty percent of the world's forests are already gone.

Reason #37: Every single day, 13 million tons of toxic chemicals are released across the globe.

How much longer will you wait? How much time do you think we have?

Our Way of Life
"The earth is not dying. It is being killed, and the people killing it have names and addresses."

All that I just listed is but a minuscule sampling of what business-as-usual has wrought. It’s standard operating procedure within our beloved “way of life” and, as Barack Obama announced to world at his first inauguration: “We will never apologize for our way of life nor will we waver in its defense.”

Reason #41: “Our way of life” has brought us to the brink of social, economic, and environmental collapse.

Each of us plays a role in the endemic carnage and it’s long overdue we own up to our culpability. However, there’s an elite group of international criminals -- now identified as the 1% -- most responsible for the perpetual omnicide. These insatiable sociopaths will never change their behavior voluntarily, which of course means: It’s up to us.

Far more than a symptom named George Zimmerman faced judgment last week. Our entire belief system was on trial and each of us remains on trial.

Before a final verdict is reached, we must ask ourselves: In this global crime spree called “our way of life,” will I be an accomplice or will be a monkey-wrencher?

Reminder: Complacent = Complicit. There is no neutral.

I’ll see you on the streets, comrades…